It actually happens. They warn you, everyone and their mother tells you over that batch of oven fresh cookies on the counter cooling—as you all whisper about it too loudly (of course she'll hear your twelve year old attempts at subtlety)—they all say the same thing.

“Don't be anywhere near that level of silliness,” she smiles with a finger wagging toward you all, a palm tree in a hurricane expressing doubt and an admiration for ignorance; because surely she's the epitome of wisdom and knowledge and all that is good and holy.

Or. So your twelve year old brain says.

The crazy thing about is, well, it happens. But you're twelve and you can't help yourself, it's a miracle that you don't manage to get lost when you take the bus to school and back—even though the first time you walked half way because you were so scared that you would take the wrong one—and in your defense, all bad ideas sound like good ones at the time. Just ask Judas.

So you stick your tongue on a street pole in below freezing weather.

And here's the clincher. It sticks.

Well, the funny thing about this whole scenario (that you of all people have found yourself in), is no matter how much they do warn you, you're still surprised.

You even pee your pants a little.

No crowds of people rush to your side, no timeless scene from a Christmas Story—hell, not even the birds cry out on your behalf—let alone the damn fire brigade.

And a dark green streetlight, shamelessly frenching one another in the middle of the January breeze for all eyes to see. A grotesque couple in warm embrace, the beauty and the beast of an iron jungle of stupidity.

You can hear them gossiping now. You might as well be pants-less.

It's the quietest a winter has ever been in your life. For the first time, you can actually describe the cadence of falling snow—the rhythm of the inhales and sighs of winter. It's the first time you've ever felt a taste of love, not as in a perverted affection for a material thing, rather the blanket of awe and fear descending upon you. You can feel a transcendent rush as the flakes billow and dance around, so perfectly at unrest. So like the risk of telling that first girl, “Maybe I do love you, what's that got to do with how often I go down on you?” and the repercussions of such vulnerability.

But you're twelve and you can't tell anyone about that, you're at risk of being called a faggot or a weirdo or worse and then there goes your social status, the only thing that matters in junior high. Not that adults ever seem to get it.

So you laugh it off, sounding like a seal with asthma, and your buddy Mike, well, he laughs in that sigh of relief sort of way that mothers do after they take a pregnancy test. He thinks you're joking, and for a second part of you is, because even you can't accept the truth.

But Mike has his laugh, especially since you're making that face with your crossed eyes—trying your best to see your whole tongue—but only catching sight of a sliver of pink meat pressed to green metal over the tip of your nose. You let out your seal chortle again, cause let's face it, it is pretty funny. It's actually stuck—who knew?

“Knock it off man,” Mike says through his wheezes. “Let's head home.”

You smile reassuringly, or what you think looks like a smile, and the moment of truth has arrived. You yank back—first a little, not too hard you don't want to hurt yourself—and you stay glued. Okay, take two, you pull pretty hard and then get this.

And suddenly. You're both very aware that you're going nowhere. Mike looks at you the way you look at a ref who makes a bad call. A blender mix of pissed-confused-worried with ice. His eyes say it all, and you can see the desperation of your own mirrored in his irises. He has no idea what to do.

So he starts to cry.

You're blown away. I mean he's totally at risk of being called a faggot or a weirdo or worse, and it's all because your twelve year old innocence couldn't dare to live in a world where you didn't know. You like to think that if the roles were reversed you'd do the same. But would you?

“I don't know what to do man,” he sputters out as the tears cascade down his chubby face. “Are you sure you're stuck?”

He starts to pace, leaving his footprints in the snow, a crunch crunch crunch that you can't see. A map of despair left on the ground for any lost souls to trace; no hope as a sinking feeling plants itself in both your stomachs. You realize at this point that Mike is, and will forever be, the best friend you've ever had.

You start to notice your tongue has lost all sense of feeling. Flashbacks to that day in bio about frostbite come to your mind.

'Localized damage is caused to skin and other tissues due to extreme cold. At or below 0°C (32°F), blood vessels close to the skin start to constrict, and blood is shunted away from the extremities via the action of glomus bodies.'

Damn. The one day in your pre-pubescent life you actually pay attention and now it's gonna bite you in the ass—well, tongue.

Mike starts to spill ideas that you both know won't do you any good. Naïve plans and brief considerations, any crack of light in this wall of darkness will do for you.

“I don't want to spit on your tongue,” he says, an image disgusting enough for the both of you. You'd much rather let the damn thing fall off.

“I don't have any water or anything—unless I go to my grandma's and get some—or at least get some help,” he sputters and cries. You know that he means well, but you both feel helpless. This must be how it ends for you, all because you couldn't help your little curiosity. And how many times have you heard about that cat?

And then. Like divine intervention, you realize you were too in shock to consider the obvious. You start to rack up your saliva glands and fire your glossy, clear salvation across the tip of your tongue.

You start to feel it working. Little by little you feel less stuck, but not free. Still, you want the numbing sensation gone so you just start to pull and...

You free yourself, making crunches of your own as you stagger backwards. You have the temporary high of accomplishment, of conquering the odds set against you. You are king of the metal poles, all streetlights bow before your awesome twelve year old power. You're overjoyed, you look at Mike and offer a genuine smile, especially because you're relieved you and your pink companion will live to shower your mouth again.

But Mike, bless his soul, he's sniffling as the tears are wiped away, he doesn't look at you. Instead his eyes are glued—ironically—to the spot in which you once stood, well, were stuck. A tiny 'o' of horror is the expression on his face, and you expect the worst.

On the pole, right where your raw sliver once hugged, are the bloody remains of parts of your tongue. For lack of a more eloquent word, chunks of your tongue are frozen to the pole, and this is how you will describe the sight for the rest of your life. A field of red and pink roses, resting upon a gentle lawn of dark green grass.

You look down and your tongue looks more and more like raw beef. Not to mention it burns, but you welcome it. Hell, fire beats ice. You have the taste of blood in your mouth and you couldn't be happier—so you keep your bloody toothed grin wide.

“Let's get out of here, man” you say to Mike, who nods in agreement.

You dwell on that moment from time to time. Nostalgia has always been one of your strengths, however, what awoke in you that day has never changed. In spite of all the reminders—your father yelling at you for your idiocy, the excruciating pain you felt when you accidentally ate ketchup with your chicken the next day, the occasional storytelling to friends with Mike—none of them quite hit the nerve. Only one reminder does.

It's the neon stain on the pole that exists to this day. A faint imprint of your innocence, pressed against a streetlight in January. Neon green, a secret that only you, the metal, and winter's breath know.

You pass it often enough. 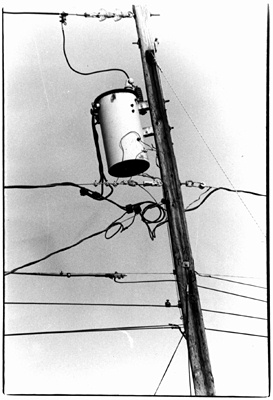