My feet danced violently. They crossed over each other, twisting and then springing into the air sporadically to the right, to the left, sliding into the red earth as swiftly as light itself as they landed, tracing clouds of dust about the broken furrows scratched in the ground before me. It was chaos, but it was perfect, and my body, eternally sprung into a vicious pounce, was coiled with such impossible tension that I was bionic. My eyes shifted as I sprang forward with breakneck motion, meeting the next rubber ball with my side as my hands had been too slow to react. I sucked in my breath and keeled a bit, clasping a gloved paw to the stinging radiation of pain. The ball was in. Pushups.

The position of goalkeeper was an accident, a fluke. They needed a keeper for the lacrosse team, and a blind “sure” escaped my lips before I knew what had actually happened, being the risk-hungry 13-year old loser that I existed as. But it eventually worked beautifully, I suppose. I became brilliant at the task. Goals were stopped, games were won. I sized up the opposing goalies across the stretch of field— who usually towered over myself in the gladiator armor we were semi-secured under—and I smirked at them in polished aplomb.

And the games were fine. But a cog had snapped inside of me, as the seasons stacked. I was the pariah. I presented their victories on a silver platter and I was praised and then they turned their backs and all I could see was blonde ponytails swinging away from me, into the distance, off the field, through the whitewashed hallways after lunch. They distanced themselves from me—a tiny goalkeeper standing in a metal cage at the end of a barren field of red earth, with dark tangled hair twisting out of the back of a white helmet as I caught the shots they hadn’t managed to fend off properly and lugged them back down the field with all the strength my skinny wrists could find—and I distanced myself from them. I was becoming an aberration, a black sheep, a weakening shadow of myself for reasons I could not explain. I was breaking away like dust with every rubber ball that hit my side or every minute of silence that passed.

I was dead inside, by the next year. Worthless coaches, maybe...worthless teammates. I trudged alone to the practice fields five days a week in silent contempt, limping down the sidewalks horribly as I hauled the bag of gladiator armor behind. My mind tossed anarchically.

The last season, after transferring to the semi-divine realm of a new high school from the torrid storm of the last hell, was a misted haze of swirled emotions and teenage angst. I quickly discovered that nothing had changed; a 13 year old loser to a 16 year old one.


Falling into the slow perpetuity of clockwork —a grey, indefinite mass stitched with broken memories and lost goals—the days began to mesh again.

Walk to practice, run, useless stretches, run, listen to coaches who could care more about going home and grading papers than the well-being of their girls, drill, break off from the team and be pelted with shots by the coach, be pelted with shots by the entire team, scrimmage, scrimmage, run, run, get home late, stay up late, get up early. And I could do it all fine. I could do it all exceptionally well. But I couldn’t enjoy it.

Soon my spine was racked with pain. Overuse and excessive conditioning had rendered my body nearly crippled, merely weeks into the new season. Pain pulsed through my knees and shins and my ankles cracked and rolled, my wrists throbbed with decrepitude, my shoulder the same, and a heavy enfeeblement itself settled over my being like a cloud of ash. It suffocated me and garroted me inside, and I lay on my bed for hours at a time, asphyxiating in exhaustion and tenderness that chained me even as I sat in classes.

And slowly, slowly, I drifted away. I was benched, and appeared as a scepter at a few dwindling games. They never lost, due to my previous efforts and that of my replacement. The season broke away into a quiet shatter, deliquescing into silent pieces that floated off into the wind like dandelion seeds. I rarely saw the others. It was mournful...to see something I had instilled so much of my sacred, golden time into, my liquid youth, something I had once loved, evanesce away like it was nothing at all.

And there had been no joy. I was hollow.

Before the downward spiral, the school had given me a helmet. It was a beautiful, perfect shining thing coated in a lovely forest green, unscathed. The black bars across the facemask gleamed in packaged illumination, and the shell was flawless and I opened the box and put the thing on and it smelled like a Saturday morning, and as I took it away with my gloves and my little gray bag I grinned stupidly because it was perfect and flawless and mine and I was a brilliant goalie and we had never lost a game and there were other games to be won.

I wore the contraption, five or six days a week, the cage around my head with the tangled dark hair sticking out the back, and underneath it was a brilliant goalie, and underneath the goalie was a chassis, and nothing but.

What is success, then? There is none, it does not exist, if we are not fulfilled within ourselves. One may toil a lifetime to achieve perfection but if the results, although fruitful statistically, do not instill a sense of worth in us, a sense of relished love for the thing for which we strive for, then the effort is null. For what do we schlep with the baggage of a forced life if there is life left...

And I sit here as my back, a year after, coils in tension, and in my head I go through the motions: Step to the ball, stick on the ground and angled forward for the bounce shot, hug the pipe when she comes at that angle, stick on stick at the crease, watch it low, get to it quicker, ten seconds in the crease, don’t step back in, slide into the red earth as swiftly as light itself as you trace the clouds of dust above the broken furrows scratched into the ground before you. 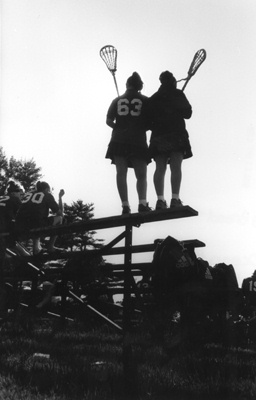 The author's comments:
I had wanted to be great. I had wanted to be the best there was. I had poured my heart and soul into that team, and for what. I suppose in the end, after the suffering, I found myself, and found a lesson to take. I hope anyone else, in anything they do, will give it their all, but find yourself, and find yourself happy.
Post a comment
Submit your own