The Dog that Changed My Life | Teen Ink

The Dog that Changed My Life

When I was little I was afraid of dogs. I don’t know why, but it was probably because my neighbors had two big dogs, and my grandma had a mean dog named Annie that would snap at people.

I grew up with my cat, amber. She was everything to me, and then little by little in third grade she lost her appetite, she wouldn’t eat anymore, we bought her canned food she didn’t eat much of that either and everything she ate she vomited back up anyways. My mom took her to the vet on day when I was at school. They found that she had a disease where water was filling her lungs.

My mom told me they were going to put her to sleep the next day and that I should say good bye. I slept in the bathroom with her that night and in the morning I didn’t want to go to school the next morning but my mother made me. I went to school and told my best friend that amber was dying today. She and I wept together. The teacher understood when I didn’t do much work that day. When I got home I went under the desk in our family room and cried. I did not come out until dinner was ready. I continued this behavior for about three days. Then amber was something I thought about less and started thinking about other things.

I would go to my room and read for hours to keep my mind off amber. Suddenly it was my birthday. I was so intent on other things I did not see it coming until it was five days until my birthday. I woke up on my birthday excited and wondering what I would get. I ran up the stairs and my mom put a tiny puppy into my arms. She was so small I could not be afraid of her. I named her Cinnamon Cocoa of Colorado; it took me forever to find the perfect name for such a perfect dog. I had my mom take a picture of her which I showed to all my friends at church the next day. After that, I would either have a picture of her or her with me at all times my mom would put her in a purse and give her to me when I walked out the classroom door. We grew a bond between us. When I would read and she would sleep on my lap. I slept with her taking her outside on a leash in the middle of the night when she needed to go to the bathroom, giving her baths when she played in the mud. She trusted me to feed her, bathe her, and take her outside to go to the bathroom.

She helped me see how dogs really are. Dogs are a lot like humans. Some are not very nice, but are good at heart. 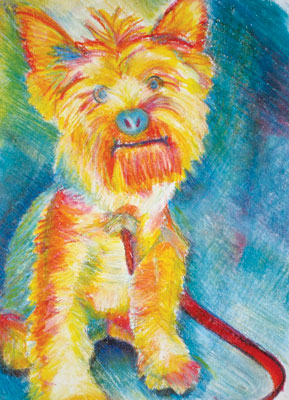