There are many kinds of horses in the world, and I believe that it takes a special horse to make each person’s life complete. I found mine, but I had no idea of his worth until one day when I witnessed the true meaning of kindness and compassion.

Her name was May, and she was a little eight-year-old from the city visiting her grandparents in the country. Her grandparents were our neighbors and friends, and they asked if May could come to our barn and meet my three horses, Monty, Twix and Rustler. My parents and I headed to the barn to meet them with a simple plan: I would show May how to brush a horse, tack up, and then have her ride while I led her around. I remembered me at that age, completely horse crazy and eternally grateful to any horse owner who would let me spend time with their horses. I wanted to give May what people gave me when I was her age.

May bounced out of the car, an energetic blonde so excited she was ready to burst. She gave no hint of being shy, striking up a conversation with me as I went to the pasture to catch the horses. As soon as they came to the fence, looking for treats and nickering happily, May stopped dead in her tracks and turned white. I looked at her, confused by her sudden change.

“What’s wrong, May?” I asked. She simply pointed to my three horses and backed up. “I thought you liked horses! Come on, they won’t hurt you. These are the nicest horses you’re ever going to meet. See, I’ll show you.”

I climbed over the fence and haltered my four-year-old chestnut, Twix, and led him out of the pasture. I made sure she could see me petting and talking to him, but still May looked upset.

“May, you said you liked horses. What’s wrong?” her grandmother asked.

In a fearful voice, May whispered, “They’re huge. They’re going to step on me.”

I laughed, saying, “The only thing Twix steps on is the ground. Don’t worry.”

I tied Twix to the hitching post and began to brush him, getting a bit nervous myself. Twix was only four, after all. He had only been trained for six months and was still green. What if he did step on her? What if he spooked? Questions and what-ifs ran through my mind but I remained upbeat, hoping that I could raise May’s confidence.

After five minutes of coaxing, I got her to come and pet his shoulder. At her touch, Twix stood stock-still, not even twitching. She stroked him with wide eyes and he turned his big head to look at her. She stopped, petrified, as he gently reached out and put his nose into her hand, blowing softly. His eyes were liquid brown and gazed at her with absolute kindness. May quietly, slowly, reached up and stroked his face. He stood still, watching her, and she smiled.

Bit by bit, May gained confidence. Soon she began brushing Twix and talking to him quietly. With his bridle and saddle on, I gave May a helmet and lifted her onto the saddle. She clutched the saddle horn, her confidence momentarily lapsing. I showed her how to hold the reins and told her what to say to get him to move. I clipped a lead shank onto the bit and started off down the long driveway, talking to Twix and praying that he wouldn’t spook at anything.

Twix was the champion of champions. He walked slowly and deliberately, making sure not to jostle or bounce May out of the saddle. By the time we reached the end of the driveway, the little girl was grinning from ear to ear. I smiled at her joy, knowing that Twix had given her confidence.

As we approached her grandparents, I made a final prayer and unhooked the lead shank. Twix kept walking slowly and calmly. Just like I had showed her, May pulled gently back on the reins when she reached her grandmother and said firmly, “Whoa.”

Twix stopped immediately, and stood quietly as I lifted May off the saddle. She was smiling as she turned to leave. Then, she stopped and turned, going to Twix’s head. He lowered his eyes to her level and the two of them gazed at each other. She stroked his nose one final time, her eyes shining with happiness.

As they drove away, May stuck her head out the window, smiling and waving until the car disappeared from sight. I leaned into Twix, suddenly tired and relieved. I smiled as I untacked and brushed him, knowing that my four-year-old had taken care of May. He had given her confidence and treated her with a gentleness that can’t be trained into a horse. I patted his neck and said, “You’re one of a kind, Twix. Thank you.” He snorted and trotted off to his buddies. It takes a special horse. 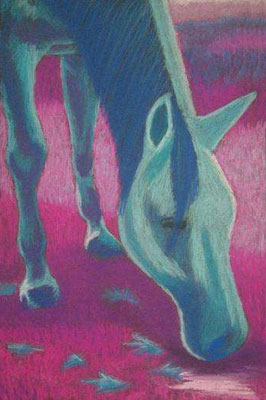