The sun wasn’t quite over the horizon when we hit the water. It was 5:45 a.m. on a perfect summer day and my friend Jeremy and I were kayaking to one of our favorite dive spots. The water was beautiful and glassy and the wind was calm, as it almost always is in the early morning. We could see the silhouettes of the reef through the dark, cool water as we paddled; the slow dip of our paddles in and out of the water and the occasional wave bumping the side of the kayak broke the silence of the sea.

The sun was above the horizon now but behind the clouds, which were kind enough to shelter us from the blinding glare of the ocean’s surface. The Mokulua islands looked like two huge scoops of green tea ice cream as we approached the empty beach on the larger of the twin islands. We hauled our kayak over the dune shaped by the nonstop pounding of the shore. The other island, a few hundred yards away, blocked the sun and kept the beach cool in its enormous shadow.

Gazing into the crystal-clear water we saw hundreds of little fish. Suited up and ready to go, Jeremy noticed a dark shadow in the water.

“Is that a shark?” he asked, pointing. It suddenly popped its head up for a second and, to our relief, turned out to be a huge honu (sea turtle). It caught a breath and quickly tucked his head down, disappearing in a fury of splashing as it swam away as fast as it could.

It’s a weird feeling to be in water and not get wet, but my wet suit kept me dry for only a second before water rushed in around my hands and ankles. I looked at the baby reef fish and swam deeper with Jeremy right behind me. Making sure he was a good distance away, I cocked my spear gun and started my hunt for larger, more delicious fish.

Visions of big ulua and huge blue and red uhus went through my head as I swam behind the islands. The water was deep now, 50 feet, and the bigger fish looked small from the surface. Jeremy was right next to me and we watched each other’s backs as good dive buddies do.

I saw a cave and pointed toward it, but before I could get his attention, Jeremy was already making the drop to check it out. He got to the bottom ten feet from the mouth and started crawling, making sure he was low to the reef and pointed his 100 centimeter spear gun toward the darkness of the cave.

That’s when I saw a dot out of the corner of my eye. It was moving back and forth getting larger as it approached. I knew what it was but my mind just couldn’t believe it. The 10-foot resident landlord - a tiger shark - was 30 feet down when it saw me floating on the surface. I could feel my heart beating, and I’m sure my eyes were so big that you could see them from a hundred feet.

As the shark got closer, I extended my arm and pointed my spear gun at his three-foot wide face. Now my heart felt like it was a jackhammer breaking its way out of my chest. He was five feet away when he turned broadside and eyed me. I know what I should have done - I should have shown the shark who was boss and been the aggressive one, but I couldn’t. I was frozen with fear; all I could do was stare into his empty, emotionless three-inch black eyeball.

Jeremy was still on the bottom and focused on catching his ulua, totally oblivious that I might get eaten. After what seemed like an hour, but was probably only a few seconds, the landlord began to move on. As he swam away the wash from his tail bowled me over. Jeremy started his ascent having found no uluas and stopped when he saw the shark swimming away. He flew to the surface like a nuclear submarine and, without saying a word, we swam to the beach as fast as possible and got out of the water.

As we were doing our best impression of torpedoes skimming through the water, I couldn’t help but think that this shark was only curious and probably wasn’t out to eat me. If it really had wanted to, I’m sure it would have in a second. Neither Jeremy nor I said anything as we loaded up the kayak and got ready to leave. My heart was still pounding and my right hand started shaking as we paddled home.

It was daylight and a few more kayaks were now enjoying the perfect conditions. The water was still calm and beautiful. The sun was to our backs now and the clouds didn’t need to shelter us from the glare. A medium-sized honu popped up 30 feet in front of us.

“That turtle we saw definitely knew what he was doing, swimming away like that,” Jeremy said, breaking our silence as I began to laugh. 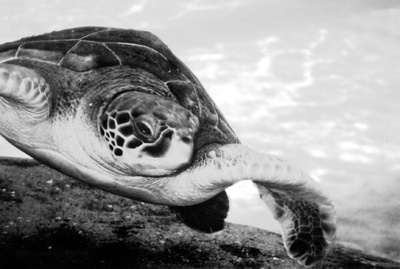 Favorite Quote:
"...From so simple a beginning endless forms most beautiful and most wonderful have been, and are being, evolved." -Charles Darwin

hey! I freaking loved this! I live in Kailua too, but have never been able to write about this. Seeing your picture of the Mokes made me smile. You know the Hawaiian secret too (;

I've never seen a shark off of Kailua Beach, but that must have been crazy! The way you wrote this was awesome! Loved it! Maybe consider showing the story a little more than telling, but over all, AMAZING! Keep writing!!

Favorite Quote:
"Just when the caterpillar thought the world was over, it became a butterfly."

View profile
Wow this must have been really scary!!!! I think you should explain what it looked like cause I had no idea!!!! :)