Everything I had worked on with the Special Olympics athletes had led up to this event, The Winter Games. This was the final competition, and it marked the end of the figure skating season for the athletes. It was late February and still freezing, and there was a thin layer of snow on the ground, which turned into dark slush once it was stepped on. As I stepped inside the International Skating Center and made my way to the waiting room for the athletes, I realized how quickly all of the time I spent here had passed. After many practices and competitions, our local Special Olympics team was finally at The Winter Games. I thought about how so many small moments had led up to such a significant event for so many.

When my volunteering officially began, it was in at the beginning of figure skating season, which typically starts in November. Originally, I found out about Special Olympics at a PEZ Convention. At the time, I was collecting PEZ dispensers, and in order to collect the more “rare” PEZ, one can go to the PEZ Convention. While speaking with one of the people selling their PEZ at the convention, I told him how I figure skate. He then told my family how his daughter had an intellectual disability, and how at the Special Olympics girls who were like me taught his daughter how to figure skate.

After the convention, my mom asked my coach at the time, Liz, about community service opportunities involving figure skating. Liz mentioned the Special Olympics and how she worked there as a coach. Also, she said she worked along with other volunteers who were about my age and were coaches as well. At that point, I decided to focus more on what I learned at the convention about the Special Olympics. Liz helped me get involved with our local organization during the ice skating season, and I began to volunteer.

Quickly, I befriended the leader of the organization at the Special Olympics, Gary and the woman who foresees everything for the figure skating section of the program, Sarah. For the first two sessions at the Special Olympics, all of the coaches and athletes worked together in warm-up circles and practicing simple moves, like gliding across the rink. Each skater looked so graceful with their hair tied up as they made their way across the ice, smiling beautifully. While the first two sessions were simple, the third session was different. As I skated across the rink to the spot where the Special Olympics meets every session, I noticed all of the coaches were assigned specific athletes to work with for the final competition. The adult coaches, like Liz and Sarah, worked with the athletes who had been with the organization for a long time and were working on more complex moves. All of the other coaches and volunteers were paired off with the rest of the athletes. Sarah assigned me to work with a girl who joined the program about two years ago and had some skating experience. Her name was Alexandra.

Throughout the rest of the skating season, I worked personally with Alexandra, or Ally, to create a routine to music, pass her compulsory tests, and on how to not get nervous in front of the judges or audience. Not only did we work on skating skills, but we connected personally and became friends. I am not sure how this began, but Ally began to call me Silly Goose. After trying to tell her to call me Jackie, because that was my name, I let it go and just let her call me Silly Goose.

For weeks we worked to put the moves in a specific order in a way that she would remember. At the start of each session, I reviewed skating moves with her that she already knew and had been practicing. Next, I would teach her new skating moves, and the most advanced move she learned was a one-foot glide. For this move, the skater must skate a bit with two feet and then pick up their right or left foot and hold it there for a few seconds while gliding across the rink. Each time Alexandra tried to complete this move, she often lost her balance and dropped her foot after a second or two. It took a very long time for her to master picking up a foot, and she was constantly struggling with this. I knew that if she worked hard she could master this, but it would take time and patience. In these moments of dedication, it became clear that kindness and working together was key to our success. We added the one-foot glide into her routine, so we practiced it at every session, and I hoped that she would be able to complete it in The Winter Games.

At the final competition, after lacing my own skates and lacing the skates of some other athletes, Alexandra’s level was called to have their warm-up session. This would be the last warm-up session before she would perform her routine. She had her costume on and was dressed like a princess with a tiara. “Swan Lake” was the song she chose to skate to. While on the ice at the warm-up session, I asked her if she would like to skate her routine just like she would in the final competition, and she did happily. With a positive attitude, I shared some advice with her on what to fix and how to make her routine better. We went through the routine many times, and our time together was filled with conversation. As we talked and worked on her routine, I had a feeling of excitement. When the warm-up session ended and we skated off the rink, I knew she was going to be amazing on the ice.

About 30 minutes later it was Ally’s turn to skate her routine. As the opening notes of “Swan Lake” began to play, I watched her skate her routine, and she completed everything we practiced together while looking graceful. She completed each move and turn. After months of hard work and tireless dedication, and the amount of effort we put into the process, seeing Alexandra on the ice showing a great sense of pride made everything, all of the months of hard work and teaching, very fulfilling. When it was time for her to do the one-foot glide, I held my breath. She took three pushes across the ice, just like we talked about, and then lifted one foot. She was not wobbling at all and had perfect balance. She looked radiant. I could not help but smile when she bowed for the judges before skating off of the ice.

Around two and a half hours after Alexandra skated, all of the other skaters were finished. We went to the awards ceremony, where we would see what medal, if any, the athletes would receive. When it was finally time to get the results for Alexandra’s level, I approached her.
“Hey, Ally,” I said.
“Yes? Silly Goose,” she said while giggling.
“No matter what place you get, you did really well in the competition,” I told her.
“Thanks, that’s really nice of you,” she responded.
Third place went to an athlete who was not part of our team. Next, they called the second place.
“Second place goes to...” I held my breath and hoped the announcer would say Alexandra. “Alexandra” the announcer said as a huge smile appeared on my face. I saw how grateful and cheerful Alexandra was when she went up and received her second place medal, which made me feel so overcome with emotion. First place went to another member of our team, Luccia. They were all thrilled for each other.

I could not stop smiling and my heart was full when I heard that Ally won second place. My smile was so big that my face hurt, but Alexandra winning the silver medal made it all worth it. I watched Alexandra walk up and receive her medal, and it seemed as if she was glowing with happiness. This moment helped me notice that the happiness I had from personal goals like collecting PEZ dispensers did not compare to the happiness I received from helping others. Every time Alexandra and I worked together, I always left feeling good, and I felt she had taught me something as well.

The work I did reflected a quote by Janet Erskine Stuart. She said, “We do not seek the showy, the great; a smaller work done with perfection often calls out more love and faith than that which is great and showy.” I saw how this quote related to my time at the Special Olympics. Even though very few people knew that I helped the athletes work toward achieving a medal, it was still so incredibly rewarding to know that I helped someone achieve their own personal goal and helped myself change my own goals.

Once the athletes for her level walked down, Alexandra and I hugged. I was sure that I would never forget the moment when Alexandra won second place.
“Thanks for your help, Silly Goose!” Alexandra said me after we both hugged.
“It was my pleasure, Ally,” I said back with a smile, and she went over to her parents.

Because I worked at the Special Olympics, I had come to realize that helping others achieve their goals is an even more special feeling than any object like a PEZ dispenser could bring me. In that moment, I knew that none of the judges, parents, or other athletes knew about any of the hard work I spent on teaching Alexandra her routine or compulsory requirements, but I still did not feel the need to tell them everything Alexandra and I did together. The internal recognition I received from making Alexandra feel accomplished was unbelievable.

That night, as I walked out of the International Skating Center I knew that next year I was going to volunteer again at the Special Olympics. I most likely would the year after as well. I could not wait until November when I would get to work with Alexandra again, and we could create a new routine together. It made me feel wonderful to know that I was part of this huge organization where people truly cared about and wanted the absolute best for each other. 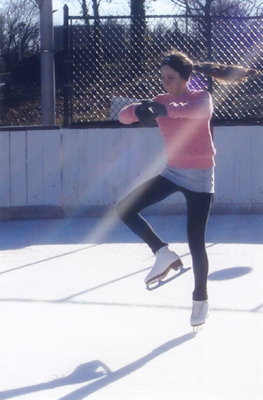 I got involved with Special Olympics Figure Skating and learned that by volunteering and helping others achieve their goals I learned more about myself that I ever would have imagined.