My heart is pounding as i step on the field. Kick off starts in a hour, but i see the other team getting ready. I was nervous i told my friend. He responded, “don't be just focused on the game”. The game was at kit carson the field was nice the sun was out you can smell the breeze the birds was outside.


30 min into kick off our team was ready,”Gather together the captain yelled’.We was all nervous because we had played sutter 3 times and we never took the win they was good.We always thought they were better than us but we never gave up we always practice run a lot laps for this championship we was ready. We wanted win this championship for us and for the school we all wanted the trophy so did sutter. Sutter had won a lot championship because they're good.


“I want you guys to give everything yah got there no tomorrow don't give up”The coach told the whole team. It was 10 min until kick off we was prepared . You could’ve hear the audience screaming “Go bulldogs and  Go sutter”. So on we was ready we was just waiting for the referee whistle. The referee blew the whistle.

The first half we were closed to scored but we couldn't there defense was good and tall. So on they was near are goalie box are goalie screamed attack they had almost scored. First half has ended was tiered. The scoreboard was 0-0- we were tied we was nervous because we were still tied. 2nd half was about to begin .Let's give everything we got “ the captain said so did the coach. We all knew that this game meant a lot for us people see how we was going after that ball and try not let them score.

The 2nd half begin the first 15 min we scored we were  happy the crowd screaming “go bulldogs”. I told them kept on trying let's not thin just because we scored we funna win.2nd half was about end in 5 min our captain had the ball he was closed to the goalie box sutter defense did not know what to do there goes the 2nd goal for us the scoreboard was 2-0 we was happy .

The game was over we all ran to the coach wet him with water bottles we were all happy. We wait for them to give us the medals and trophy. After the game we all went to eat nothing is better than spending time with the soccer team. This reflect me not to give up everyday we practice hard. Now i know that if i fail try it again till you never fail again. Now i feel that all that hard practice is worth it “ how work pays off”. 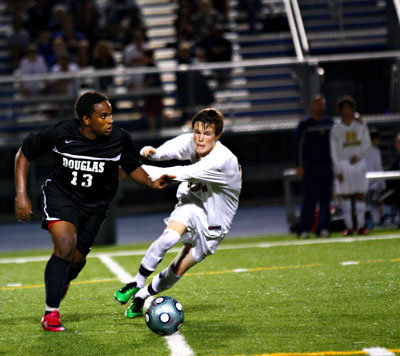