Favorite Quote:
"Forget it and move forward, this is a New Era"

The race wasn't to start for another hour, yet already my heart was thumping loudly in my chest. We walked the course and my palms began to sweat. As we started our stretches those nasty butterflies found their way into my stomach once again, just like every other race, but this time they came with a vengeance. Today was most likely the last race of the season for me. That is, only if I failed to advance to the State meet.

After finishing our stretches we made our way to the starting line. I looked around at the top seven from each team in the region. Many of these guys were at least half a foot taller than I; a bead of sweat trickled down my brow. I tried to guess what teams would make the top four, thus making it to State. West had some shorter guys, but their calf muscles were larger than both mine combined. South had freakishly tall runners with lean, well-muscled arms and legs. I put my money on them.
As we lined up and the director went over the regulations, I made a silent prayer thanking God for the gifts he had given me and asked for him to bless my team with focus and concentration to make it through this race. The director stepped back, held up his gun, and said, "Set!'
I readied myself.
The gun fired.
The next couple of minutes were a blur of confusion as 200 runners funneled themselves into the minute space between the cones. I instantly began to try to find that perfect pace, avoiding elbows and flailing arms all the way.
Find that pace, I thought to myself, Find it and stick to it!
A hint of blue in my peripheral told me that my fellow teammate Corey was right next me on my left. Keep with him. We ran side by side for the first half mile, and then we hit the woods. I caught my foot on a root and half-stumbled, but I caught myself and kept going. Corey got a few meters ahead me into the gnarled trees.
Don't lose him! Get back up there!
I increased my pace to try and catch him but he also increased his pace. I settled for sticking a few feet behind him.
Now don't lose anymore! You and him are going to State!
And that's exactly what I told myself again and again as I pushed through the first lap.
We're going to State, we're going to State...
My calves began to ache, but I passed my cheering Dad and pushed a little harder, trying to ignore them. My lungs also hurt, but it was easy to ignore that. Running by the big clock it read 12...something. I couldn't concentrate both on the clock and the course. Pretty soon I was back into the woods. The cold air wrapped its icy tendrils about me, nipping my bare arms. But despite the brisk feeling of it, the cool air of the forest helped me relax and focus on my goal.
Keep pushing, gotta keep going!
Corey was about ten meters ahead me. I passed a West runner and starting increasing my pace. I felt good.
I suddenly felt a small pang in my stomach, but didn't let it bother me. Bad choice. I kept increasing my pace. I was going to catch Corey and we would finish this out together.
I started feeling all sorts of pains here and there, but I remembered what my dad had said to me, "I want you to throw up, if it means you're pushing that hard." So I started thinking to myself,
Ignore the pain, push it till you puke at the end! Make yourself puke, make yourself puke!
And then the unthinkable happened. My stomach lurched, and so did I. I veered to the far left side of the track, looked down, and vomited. While running. I would not let myself stop; I only slowed to let it out. As I kept running, I heard someone shout, " Holy crap, he's still going!!" This only motivated me to push more.
But then it happened again. And again. I pulled the throttle back and let it out twice more, but I still refused to stop. I jogged as my stomach screamed in pain. The pain soon passed, but I had lost a good amount of time. I pushed onward with a new strength; with nothing in my stomach, it no longer hurt.
I neared the end. My dad shouted from the sideline. "You can still make it under 20 minutes!" he said. This caught me by surprise. I hadn't lost as much as I had thought! I kicked it in and began to use all the energy in my body to finish as strong as possible. I caught up to a kid from Wake county and raced him, sprinting all the way to the finish line.
I watched the clock as I ran. 19:54...19:55...19:56....
But my stomach wasn't done. One last time for the grand finale, I vomited as I was about to cross the finish line. The Warren kid, who was behind me at 19:56, passed me and finished ahead. I pushed over the line at 19:58. Stumbling through the line of finishers, I spit up several times on my jersey. But I had finished. It was finally over. Our season was complete.
The top four runners were all South. Overall they had five in the top seven. I didn't make it to State, and neither did Corey. But that was okay. When I had started the season, I had never dreamed I would make it as far as I had. I set a goal at the beginning: break 20 minutes. I had achieved that goal more than once by the end. I shaved two minutes off my time from the first meets and so I was perfectly content. Every meet I had pushed through as hard as I could and never gave in to the pain. The season was done with, and I was proud of my sick determination. 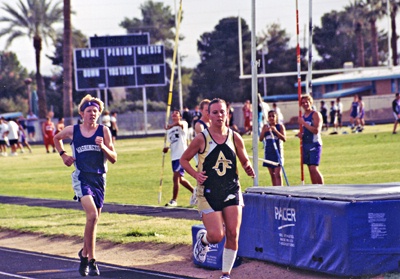 The author's comments:
This wasn't the first time I blew chumks at a meet. I've even done so before during the run. But it was certainly the most times in a single one!
Post a comment
Submit your own

Favorite Quote:
You never know how strong you are until being strong is the only choice you have left.
I Don't need easy, I just need possible.
10% luck 20% skill 15% concentrated power of will 5% pleasure 15% game and 100% reason to remember the name!

Favorite Quote:
"Forget it and move forward, this is a New Era"

View profile
You blew chumks, huh? Nice one. Like I've said, I love this story.