The morning greets me as a thick clump of white. I step out of the door and into the clouds, marveling at the altitude my group achieved the previous day. The clouds are presenting a navigation problem, however, so until they clear we are stuck at the hostel.

Instead of napping with the rest of the group, I drag my protesting legs outside, book in tow, but the picnic table I want to use is not empty. A man, maybe 25 years old, works diligently on a piece of wood; what he is doing, I cannot tell. He is bent over his project; all I can see is a thatch of unruly black hair. I sit, trying to be quiet, sighing when the bench inevitably creaks. I have disturbed my neighbor. He smiles and looks up at me from the wood, glasses sliding slightly down his nose.

“Bonjour.” I realize his face is not unfamiliar – he's the hostel's cook and last night I had thanked him for the most delicious onion soup I had ever tasted, though I doubt he understood me. I smile and return the greeting, but my accent gives me away.

“Parlez-vous français?” His brown eyes, almost impossibly large, assess me skeptically. I tell him no and ask if he speaks English. “Non, je suis désolé.”

It seems we are at an impasse. Awkward silence floats in the clouds around us. He bends back over his wood, and I open my book. After reading the same page for five minutes, I decide to try a last attempt. I ask, in my poor French, if he speaks Spanish.

“Si!” He smiles even more now. We are fast friends after that. Never in all my years of studying Spanish had I imagined I would use it to communicate with a stranger on this side of the Pyrenees.

I find he is making a sign to hang above the hostel door. He asks about my book, only to discover he has read it as well. He speaks fondly of his village, which is not far from the hostel. With calloused hands held in the air and wide brown eyes flashing, he tries to explain the mountains to me. To him, they are living creatures opening up to hikers from across the world – or el mundo, as we call it.

I become so lost in the conversation, I almost don't notice the clouds slipping away. With the white covering gone, the Pyrenees reveal themselves. Now, seeing them through my new friend's eyes, they are majestic beasts scraping the sky. Despite his limited vocabulary, he points out the peaks he has summited, and I show him the towns we passed on the way to his hostel.

After the clouds lift, my group meets me outside with bags packed and hiking boots on. I realize that it is time to trek to the next hostel, though I don't leave without first saying goodbye to Henri. I did not see him, Hostel Gavarnie, or that view of the Pyrenees again – yet, the memory stays with me.

At the next hostels, I used Spanish to talk with fellow hikers about the mountains and their various homelands. Turns out, they liked the loud American girl much more when she could actually speak one of their languages. Lessons, it seems, are not always obvious. Sometimes they can be as subtle as lifting clouds, revealing themselves before you have time to notice. 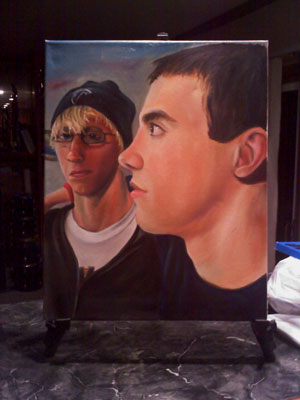 Favorite Quote:
Be who you are and say what you feel because those that mind don't matter, and those that matter don't mind. -dr. seuss