A man who has forgotten his name arrived in a city where he had no choice but to become a thief if he wanted to live. Every time he was caught stealing, the police would chase him, calling "Rat!" over and over again. Due to his lack of a regular name, he adopted the name Rat.
Rat went to live in the Tunnels, which is an enormous and elaborate maze of tunnels that run underneath the futuristic city of Maw. The unfortunate thing; that's where all of the gangs reside. Rat has no interest in joining a gang, so they don't exactly like him down there, but then again, they don't exactly like on the Surface either. 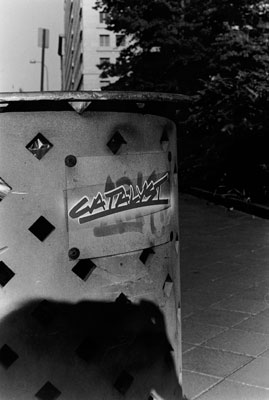 This book has 90 comments.

Favorite Quote:
May your words be sharp.
- Christopher Paolini


Nobody's going to wait for you, so do it now.
-Ingrid Michaelson

View profile
Umm.... The only problems that I really saw was the fact that the story changed from scene to scene almost instantly, and the scenes did not seem to last very long. The last problem is the fact that it's not finished.
milforce SILVER said...
on Apr. 24 2013 at 7:27 pm
milforce SILVER, Bloomington, Illinois
9 articles 0 photos 135 comments

Favorite Quote:
May your words be sharp.
- Christopher Paolini


Nobody's going to wait for you, so do it now.
-Ingrid Michaelson

View profile
This is a really good book. It's plot is fairly solid, and it has enough foreshadowing for you to get a fairly good guess of what's going to happen next, but it still has a strange way of making it seem like you could be wrong, that the story line will change at the drop of a pin.
milforce SILVER said...
on Apr. 9 2013 at 9:27 pm
milforce SILVER, Bloomington, Illinois
9 articles 0 photos 135 comments

View profile
Thanks! I appreciate it
GreyGirl ELITE said...
on Apr. 9 2013 at 1:49 am
GreyGirl ELITE, Pohang,Kyungbuk, Other
170 articles 122 photos 391 comments
View profile
Overall, this is a pretty good book. I like the idea of the plot. I do not like the dialogue, though. It is rather choppy and unrealistic in some places. However, you have a well developed world and characters. I like that you can immediately imagine what Rat is like. I do not think that the way you deliver his thoughts are very good. I don’t mean to be negative, but you said to rip it up, so I’m trying J Otherwise, this is a pretty good book. I hope you finish it!
milforce SILVER said...
on Apr. 7 2013 at 10:54 pm
milforce SILVER, Bloomington, Illinois
9 articles 0 photos 135 comments

View profile
I didn't get a chance to finish reading the second chapter (I'm about halfway through) but I'll try to make time to read it later. (: I really, really enjoyed this! THe plot is really unique, and the characters are developed very well. I loved your word choice, too. The only thing I would say is that when he is thinking, make it clearer. I noticed that you use these ' ' for thought, but it was confusing when he thought after speaking because I wasn't sure if he was still speaking or not. ... I'll comment more later!!
milforce SILVER said...
on Apr. 2 2013 at 9:19 pm
milforce SILVER, Bloomington, Illinois
9 articles 0 photos 135 comments

View profile
Thank you!! I know the tenses are screwed up...I started it originally in past tense but then switched to present and I never got the present tense versions on here...
IMSteel BRONZE said...
on Apr. 1 2013 at 7:44 pm
IMSteel BRONZE, Wallhala, South Carolina
2 articles 0 photos 128 comments

View profile
I only read the first two chapters, I'll finish the rest later.  It is a great story, twisty. and interesting.  I love it.  Most of it just needs practice, and therefore cannot be criticised.  The only major thing that needs fixing is the tenses, past, and present.  Sometimes you us past-tense, example: I said, I looked.  And other times you use present, example: I say, I look.  Other than that, you only need more description, which has already been said.  Keep writing!
milforce SILVER said...
on Aug. 31 2012 at 8:58 pm
milforce SILVER, Bloomington, Illinois
9 articles 0 photos 135 comments

View profile
Thank you so much. I appreciate it
PhoenixCrossing GOLD said...
on Feb. 12 2012 at 9:57 am
PhoenixCrossing GOLD, Tinley Park, Illinois
14 articles 0 photos 178 comments
View profile
This is really great! What a unique plot liine with such an interesting main character! Props to you. My only suggestion is to cut a lot of the dialogue and add in more detail! Great job overall!
milforce SILVER said...
on Jan. 30 2012 at 8:06 pm
milforce SILVER, Bloomington, Illinois
9 articles 0 photos 135 comments

View profile
Thanks so much! I'm working on being more descriptive and using less dialogue. I know that the balance is pretty out of wack
SarasotaWonder BRONZE said...
on Jan. 30 2012 at 7:36 pm
SarasotaWonder BRONZE, Cumberland, Maine
1 article 0 photos 61 comments
View profile
You did such a good job with this! The plot is unique, interesting, and fast-paced...AWESOME JOB WITH THAT! :) One thing I would watch out for is that fact that you have a lot of dialouge, whcih you really don't need all the time, and some more description will thicken your story up. Also, say what the characters say out loud, does it sound like something you would here in everyday converstation or is it just awkward? Overal, great work!
milforce SILVER said...
on Jan. 18 2012 at 6:29 pm
milforce SILVER, Bloomington, Illinois
9 articles 0 photos 135 comments

View profile
Thanks so much, I like them too. I don't mean to sound full of myself there, sorry. And I'm working on improving my writing. I just went through a semester without an english class, so the quality of my writing went down. I'll post more as soon as I can. Probably about a week or so