Tonka's Pride and My Joy

“Let’s do this!” I stated and with that both horses bolted forward. I squatted as closely as possible to Giant’s saddle, assuming a jockey style position. I can feel the wind whipping my hair all over the place, I felt Giant’s muscles move move underneath me as he ran ahead of Aamra. I was able to hear his heart pounding in the position I was in.


I looked to my left and saw that Aamra and Ms. Penny were passing by in a blur of dark brown, orange, yellow, white, and gold. It was early in the afternoon when we began our little race. Giant’s Causeway was in the lead by 3 lengths. I heard Giant’s breathing, it was nice and steady. Giant’s Causeway twisted his body to the left as he went around a spruce tree that I assumed was a turning marker, my body turning with his. He headed for the Oak tree, we sped by Aamra and Ms. Penny noticing how far back they were now. Giant’s Causeway decided to put himself into full gear and started to run at a faster than pace than what he was going at now. It was hard to believe that he was only going at a canter when we started this and is now going at his full potential. We passed by the little pond that was in the center of the meadow like a bullet being shot out of a .45 revolver. Judging by the distance we were in the lead by eight maybe 10 furlongs, in other words 1,760 yards to 2,200 yards.
Giant began to slow down as we reached the Oak tree, he gradually slid to a stop by the time he reached a trot and was closer to the tree. Aamra and Ms. Penny caught up in three minutes. 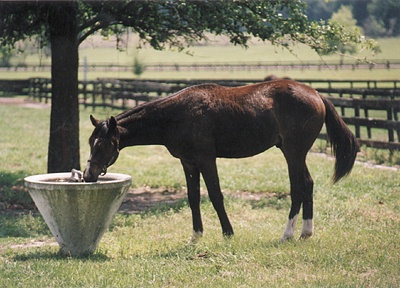 Tonka's Pride and My Joy

Favorite Quote:
"I was thinking how nothing lasts and what a shame that is."-Benjamin Button

Favorite Quote:
"Our deepest fear is not that we are inadequate, but that we are far more powerful than we have ever dreamed."