Agriculture has come a long way, and now, with the newmillennium, corporate seed companies claim that the only way to feed the world iswith genetically modified organisms (GMOs). I believe GMOs are a major problem,and more people need to be informed about them.

Currently, the U.S. Food and Drug Administration has nolabeling requirements for food containing GMOs. It doesn't make sense that it islegally required to state on a label if a product has a salt additive orpreservative, yet it is not mandatory to inform consumers of unnatural, aliengenes being spliced into the food they're eating.

Along with beingunaware of everything that is in food, the public also doesn't know of thenegative effects GMOs may have on the environment. With the high levels of BT,(Bacillus thuringiensis) pesticide found in every genetically engineered plant,it won't be long before strains of resistant bugs and weeds emerge. This willonly cause farmers to use more pesticides, and the weeds to become extremelyinvasive and choke out natural habitats. Cornell University researchers foundthat after eating milkweed dusted with corn pollen from genetically engineeredcrops, monarch butterflies died.

Since GMOs are a relatively newdiscovery, no one is entirely sure what their effects might be. Despite this,corporate giants like Monsanto and DuPont continue in their "mission to feedthe world," claiming that genetically engineered seeds will use less land toproduce higher yields. I, however, believe that they are more concerned withmaking a buck than the future and well-being of mankind.

Today, enoughfood is produced to feed eight billion people, and the current population is onlysix billion. So, obviously, we already produce enough food. Instead of trying tobrainwash farmers, seed companies, as well as government agencies, should spendthe money on something more useful. Why not teach sustainable agriculturalpractices to residents of third-world countries, where 24,000 people die each dayof hunger? 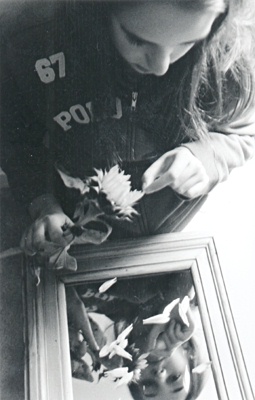 Favorite Quote:
"Be quick to listen, and slow to speak, and even slower to judge."

Favorite Quote:
"Be quick to listen, and slow to speak, and even slower to judge."

View profile
The whole idea of GMOs is interesting to me because I personally have a hard time taking a side. In my opinion, the problem lies not in GMOs themselves, but in lack of labeling restrictions, lack of 3rd party testing and long term testing -on both health and environmental issues- , and in the way that large biotech companies like Monsanto are permitted to act - in relation to patents, smaller companies that are of no threat to them ( Monsanto has put many small farmers out of business and costed others millions of dollars over trifle and sometimes inaccurate issues surrounding stolen seeds or labeling products as non-GMOS/rBGH free (etc.)) as well as ethics involving their products -While I see no problem in investing in the science, I think that the regulations should definitely be a lot stricter. This is a really long comment, so maybe I should just write my own article on the topic. Either way, you definitely did a good job expressing your views which are obviously a lot clearer than mine!