The Black Plague and Coronavirus Juxtaposition in Art | Teen Ink

The Black Plague and Coronavirus Juxtaposition in Art

Europe was perfectly set up for a pandemic. European trade and wars before the 14th century interconnected nations, alongside natural disasters like flooding, caused the plague to spread out easier. Rats and fleas proved the perfect vectors for transmitting the disease because they could reproduce at fast rates, climb almost vertical surfaces, and enter quarter-inch wide holes.  As floods brought rat migrations, rats and their flea companions found their way into holes and cracks in the walls of homes and other places. During the Middle Ages, 200 million people would die because of the bubonic plague, colloquially known as the Black Death. Considering the population of the world was around 500 million, its effects were devastating. After the black plague, people started moving away from the church and began to focus on themselves, and became interested in learning more about the world around them. These changes in society and new worldviews on life were reflected in the art of the time period.

Amidst this current pandemic of the coronavirus, art has similarly been affected, just as it was with the Black Death pandemic hundreds of years ago. The art pieces made after the plague and the art pieces made in 2020 during the coronavirus share similarities in that they both reflect the influence of Humanism and Individualism. The influence of Humanism and Individualism shows people adapting their environment in response to the pandemic and challenging existing power structures.

The Black Death was one of humanity's worst pandemics and its large-scale effects laid the foundations for modern Europe, causing people to re-evaluate their current ways of living and improve their society. The environment made a significant difference as the Black Death caused an overwhelming number of deaths in towns; neighborhoods could get wiped out in just days. This is shown in an art piece made in 1349 drawn to illustrate the people in Tournai (current Belgium) carrying the victims of the black plague in coffins.

The amount of coffins there are and the people carrying them shows how many lives were stolen, and how many families were affected by the disease. In the illustration, the people’s heads are down and their faces are gloomy, which shows how much grief the black plague caused in communities.

Currently, with the Coronavirus going around we are starting to see a similar movement in the world of art due to the effects of the pandemic. In 2020, people quarantined to prevent us and others from getting the virus. This means that people are staying in their homes for a long period of time and not having contact with anybody outside, which could be very lonely. This loneliness and distance from others during this time have been captured in the painting below.

In American Solitude by Tori White, she painted two houses with a person in each of them facing each other. This shows how distant people are currently feeling toward others. The artwork made after the Black Death was influenced by Humanism and Individualism, but this piece of art is influenced by the coronavirus itself. Like the drawing of Tournai, this art piece shows the toll a pandemic can take on society. People have to be quarantined and separated from others, which is represented in this painting.

The Black Plague caused people to second guess their old age beliefs in many professions. Since so many people were dying, people sought answers from sources other than religion and began studying medicine, science, and history. People who made a living from Humanism were Humanists, and they, in turn, influenced learning through teaching Greek and Latin. Humanism focuses on secular themes rather than religious ones, especially classical antiquity, the culture of ancient Greece and ancient Rome; the Renaissance was the rebirth of this culture during that time, and architecture after the plague included a lot of characteristics from Greek and Latin art. For example, in the Cathedral of Santa Maria del Fiore in Florence, the building’s symmetry and intricacy are characteristics of Greek architecture.

In this picture below, which is a picture of the Cathedral from another angle, you can see that on the right of the image there is a very large dome. Domes were used frequently in ancient Rome and the Renaissance, but rarely during medieval times. This art structure reflects the time period because of the new characteristics and how spacious the structure is, making large buildings so if another pandemic were to occur, they would be safer.

Currently, 2.2 million people have died from the coronavirus worldwide, and 102 million people have coronavirus cases. With the Coronavirus going around we are starting to see a similar movement in the world of architecture due to the effects of the pandemic. In this image created by Emma Roulette, you can see that there is an office designed so the people are safely distanced from each other. There are barriers to protect the workers’ faces, wall barriers zigzagging through the workspace, and walls between desk areas to prevent the people from coming into contact with each other.  This shows how much the coronavirus is changing our environment because now we have to worry about social distancing. Just as in the Middle Ages, the architecture now is being affected by the coronavirus. Structures are being designed to ensure that everyone is kept safe while indoors. Since you need to be six feet apart from everybody and most buildings now are difficult to social distance in, they are thinking of designing coronavirus safe structures in case the pandemic goes on for longer than expected. Humanism is reflected in this office design because the illustration shows how people varying from the past and improving the environment according to our current time and circumstances.

Like Humanism, Individualism also came as a result of the Black Death. Individualism is the emphasis on the worth of the individual person. This meant that people were freer from the strict rules of the church and rigid class structures of the Middle Ages and had more of a say in what goes on in their society. Not only was Individualism applied to the actual people, but it was often used in art. This is a self-portrait of Albrecht Durer, made in 1500. This work of art is very different from the art before the plague, during the medieval time, because its more detailed shading emphasizes the importance of an individual. This art piece shows Individualism and Humanism, which were important characteristics during the renaissance.

As you can see, Durer has a front view, which is quite uncommon because it suggests that he is comparing himself to Jesus. Usually, people would be painted at a three-quarter view. For example, in the painting of Tourani, all the people are painted at an angle which indicates that they are commoners, but because Durer is painted with a front view it shows how highly he thinks of himself. By his colorful clothes and well-kept hair, you can assume that he must have been someone with great importance since it takes a lot of time and money to maintain his long hair and to buy red clothing with fur. The writing at the top right can be translated to read, “I, Albrecht Durer of Nuremberg have portrayed myself in my own paints at the age of twenty-eight.” This means that Durer was trying to show his skills of observation and artistry. The writing at the top left of the painting reads “1500 AD” which is the year he created the painting and is his signature. He placed these writings in the middle of the painting, at his eye level, so the observer will definitely notice it, which is a unique but effective thing to do. His hand position is significant because the way he is holding it near his heart tells you that he is someone of high status.

Below is a painting called Stay Healthy by Dario De Siena, made in 2020. As you can see, in the painting there is a girl wearing an orange mask and her face is painted in a full front view. Like in the Durer painting, this indicates importance. Her mask is a crucial part of the painting, and the angle she is painted at further emphasizes its significance. This shows how people are wearing masks and is influencing them to wear masks to help prevent the coronavirus. Telling people to wear masks greatly affects the number of people who do it but creating images of it further impacts people to wear it. Due to the advances in technology, we have currently, we now wear masks to prevent the spread of diseases, which is very different from the artworks made after the plague. Similar to the coronavirus safe office design, this art piece is directly influenced by the coronavirus because we wear masks to prevent the spread.

Because the plague was so devastating and impactful on individuals and society, its effects can be observed in the art architecture at the time, just like how the impact of the coronavirus today. After the black plague, people began to question God and started moving away from the church and began to focus on themselves, and became interested in learning more about the world around them. The Tournai drawing and American Solitude both show how the impact on communities affects the art, and the Cathedral of Santa Maria and the illustration of the office space both showed humanism through the improvements they made to their surroundings to fit their period. The painting of Durer and Stay Healthy both show importance in the individual. Art and architecture during our current time were influenced by a coronavirus in the same way the Black Death did, with an emphasis on different worldviews guided by principles of Humanism and Individualism. Like those worldviews, the mask and the walls separating the desks in the two art pieces reflect on our current time period and how coronavirus revolutionized the twenty-first century. 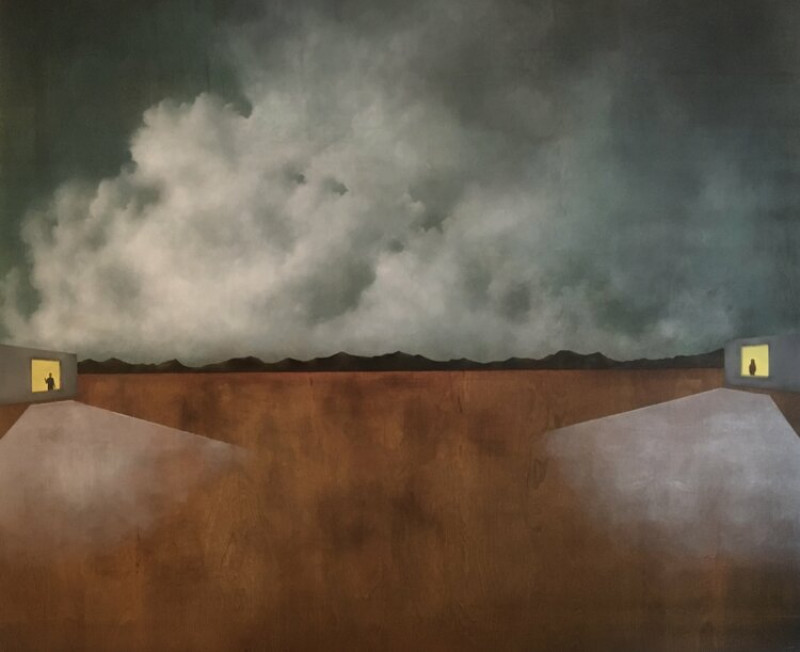