What Are We Really Celebrating on Inauguration Day? | Teen Ink

What Are We Really Celebrating on Inauguration Day?

As the inauguration process wraps up, I have given myself a chance to reflect on this historic making moment. Over the past few weeks, I have watched numerous news channels and listened to various radio stations as they regaled Barack Obama and his quest to become the 44th president.


The New York Times, called the inauguration a “Profound Moment in our Nation’s History”, while BBC News declares Inauguration day as a “national holiday” and even Obama himself, proclaims that “it is a time to celebrate.” But celebrate what? If I may ask. Thousands gather before the nation’s capital from all walks of life. Various races gather together to take part in this tremendous time in history. Hearts melts as they watch the President’s children walk by, and hearts soar as they breathlessly observe Obama take his oath. At home Americans and millions of people worldwide scream in anticipation at this “glorious” day, and each day news stations show footage of Obama and his inauguration process. The New York Daily News states that this momentous inauguration is the most expensive in history with the “price tag for the swearing-in festivities [approaching] $160 million.”


I am in no sense of the word, a pessimist and shy away from being a cynic. I am a strong Obama supporter and a fellow African immigrant, but I must ask myself what exactly are we celebrating? The fact that it has taken us forty four presidents before we have the audacity to elect a black one? Or better yet, are we celebrating the fact that it has been forty years since the death of Martin Luther King Jr, and it is only now that his dream has been fulfilled? Obama continually harps on how much the country has progressed, so much so, that a black man can now be president but the election of a black president should not be seen as a sign of progressivism. It should not be a time for Caucasians to give themselves a pat on their back for accomplishing such a daring task as to elect a black president. It should not be an occasion where we hold parades, in order to honor this day but should be something expected; a social norm.


On the other hand, are the many people who have been greatly affected, emotionally, on this day. Africans-Americans and blacks round the world have gathered to watch the swearing in of Obama, the poster child of the American Dream. But once again I must ask myself, what we blacks are doing to keep Martin Luther King’s dream alive. African Americans have the 2nd highest high school dropout rate. For the most part they have also had the highest poverty levels since 1975, except for 1994,1995,1996, and 1997 when the poverty rate was closely contested, but alas the Hispanic race ended up as the winner. The New York Times states, “An estimated 12 percent of African-American men ages 20 to 34 are in jail or prison” compared to “1.6 percent of white men in the same age group who are incarcerated.”


As we cry, and shout, and reminisce about the past, we must remember that this inauguration isn’t just a time of emotion gone awry and pellucid theatrics. Less than 4 decades ago, abolitionists were fighting to obtain the right to an education and the right to live freely and we have taken this for granted. Blood was shed for this very reason and in countless nations an education is considered a luxury. It is imperative, that we do not allow ourselves to be swept up in the euphoria but rather, we must take a look at how strong American leaders were made. It was through a sold education, determination, and the longing to provide better lives for themselves and the ones they love[d].


Supporting Barack Obama, and cheering for him as he passes through your town, is fine and dandy, but he has done his part in keeping Doctor King’s dream alive. It is our turn to do the same, so stand up and let your voices be heard. Always endure and maintain the tremendous spirit of brotherhood that America has been associated with for many centuries, and for centuries to come. 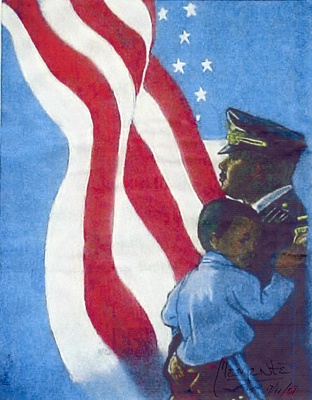 elliworminson said...
on May. 12 2009 at 9:34 pm
So good! Very well written. I could see an article like this in the New York Times or some other prestigious newspaper or magazine! Very mature language and ideas are well supported
HOPEMVP said...
on May. 4 2009 at 1:47 pm
I personally liked it (composition wise)
kylove GOLD said...
on Apr. 25 2009 at 3:55 am
kylove GOLD, Sacramento, California
11 articles 0 photos 14 comments

Favorite Quote:
"Principles only mean something if you stick by them when they're inconvenient,"
- Laine Hanson (Joan Allen) in The Contender (written by Rod Lurie)

View profile
I really liked that. I was thinking the same thing and other things about the election/inauguration. I see your point and very nice writing! As previously said, a few tweaks and that could've been an article from the New York Times. Great job and I hope to see more of your work.
mwade said...
on Apr. 23 2009 at 10:45 pm
I completely agree with the commenter underneath me. This is very well written and your points are expressed clearly but there definitely is a first time for everything and it should be celebrated!
BookWorm579 PLATINUM said...
on Apr. 22 2009 at 4:20 am
BookWorm579 PLATINUM, Elk Grove, California
26 articles 0 photos 33 comments

View profile
Hey! There's a first time for everything! People have a thing for celebrating firsts. In any case, black teens everywhere now have something like a Martin Luther King to live up to. There's an oppurtunity here and (call me optimistic or naive) I don't think we'll let him go to waste.
Amyrinolax1010 said...
on Apr. 19 2009 at 6:51 pm
This is wall written. certain parts could be tweaked and retouched tho...