Before World War 1, the conventional views of women trapped them in an uncomfortable and unfair lifestyle of being treated as inferior and responsible solely of the housework and nurturing the children. Men believed that women were incapable of performing advanced work and most women conformed to social norms at the time. However, the perfect opportunity to break these social standards came when World War 1 broke out in 1914, and women from countries all around the world such as Germany, America, Britain, Russia, Australia, and France had no choice but to jump in the work field due to all the men being sent to fight in the war. Women’s participation in the World War 1 war effort changed history, and became a turning point for both men and women. During and after WW1, men’s views of women changed significantly and they began to give recognition to women’s contribution to the war effort, support the enfranchisement of women, and started to break the stereotypes of a conventional woman in their minds.

With almost all of the nation’s men being sent to the battlefield and the seas to fight, women had to take on the roles that were originally only meant for men. While most men at first disliked the idea, the great progress and support provided by the diligence of female employees caused large numbers of men, both in the course of WW1 and after it, to start acknowledging the capabilities and potential of women in the workforce. Since the products that were highest in demand were ones that were used in the war, the majority of women labored in dangerous working conditions and took the roles of ammunition testers, X-ray operators, nurses, doctors, ambulance drivers, and seldom even soldiers (Fara 5). The fact that they were allowed to make delicate weapons and serve as medical staff implies that men trusted and relied on the help of women, and approved of their skill. To be specific, the X-ray machine, invented with the help of female scientist Marie Curie, was used on the battlefields by female X-ray operators to treat soldiers, and the use of this machine indicates that the intelligence and creations of women were essential to men, and not to be looked down on (“Women in WW1”). A male observer wrote that American women were determined to “do anything they were given to do; that their hours are long; that their task is hard; that for them there is a small hope of medals and citations and glittering homecoming parades,” (“Women in WW1”). The observation made by the male spectator clearly portrays the diligence of women workers in order to gain more respect, receive approval, and show their potential to men and the government. Even though the workload was extremely heavy and the tasks were completely new to them, they were able to quickly become adept at producing essential material for the war. The motivation for women was the faith they had that if they worked hard and well, then men would start appreciating the capabilities of women, and would stop viewing them only as housewives who could cook and clean. All in all, the persistence and diligence of women in the workforce altered men’s perspective on women and helped them realize the potentiality of women workers.

The second way in which men’s views changed about women was towards the end of World War 1, when men began to approve of women’s enfranchisement, and women from all over the world started to achieve their long-dreamt goal of having the right to vote. In 1917, women in Canada got the right to vote, and British, German, and Poland women got the right to vote in 1918. Adding on, women in Austria and the Netherlands got the right to vote in 1919. Almost all of the countries listed were ones that had fought in WW1, where women had enormous contributions in the war effort. Due to the help of women in WW1, economies were able to not collapse and men were provided with war materials and food. It can clearly be concluded that women had proved their value and worth by being an essential contributor to the war, and that the majority of men agreed upon the fact that women were just as capable as them, and that they deserved the same human rights to vote. One specific example of men changing their opinions on women enfranchisement was when President Woodrow Wilson of America questioned, “We have made partners of the women in this war. Shall we admit them only to a partnership of suffering and sacrifice and toil and not to a partnership of privilege?” (Higgins). Before the war, President Wilson had actually opposed the idea of women voting, but after experiencing the impact of millions of women in the war effort, he changed his perspective on women, and started viewing them as partners, which meant that women and men were basically in a ‘team’ together. Wilson also serves as a representative of the entire American population, so it can be implied that most American men changed their perspectives and viewed women as needed partners rather than inferior and less intelligent laborers. To conclude, World War 1 had a significant influence on changing the views of men on women’s enfranchisement, and helped them realize that women deserved the basic rights to vote.

Lastly, men’s perspectives and stereotypes on the general image of women shifted greatly, due to the new and unfamiliar roles taken upon by women during the war. Before the war, men believed that they were born to be superior, and that women were inferior at birth. Social Darwinists, who claimed that men biologically had stronger brains compared to the frail brains of women, bolstered men’s beliefs, and blocked out the cries and objections made by women (Fara 5). Women were also excluded from politics, as men considered a woman to be an irresponsible mother and wife if she showed interest in the topics only for men (“Changing Role of Women”). Shockingly, women lacked the basic rights as humans because they did not have the same freedom and control when in a relationship with their partner, and were not at absolute liberty to have a divorce, not to mention that they had less control over their children compared to their husbands (“Changing Role of Women”). These appalling examples of how women were mistreated and limited by men solely due to their gender illustrates how the strongly-fixed perceptions and social norms trapped women’s potential in a tightly locked cage. It can also be observed that men thought of women as lesser human beings that they could control and manipulate in any way they wanted to, and assigned women to tasks that were related to the traditional gender roles, such as raising the children and cleaning the house. However, following the war, major changes were made for women. As soon as World War 1 was over, men returned to their jobs and women were no longer needed in the workforce (“Changing Role of Women”). Many women conformed to their husbands’ word and decided that it was better for the family since men still earned higher wages compared to women. However, one of the major changes was that men allowed women to work in factories and carry out medium-skill leveled tasks (“Changing Role of Women”). In addition, women gained further confidence in each other and communities such as the Women’s Social and Political Union encouraged women to continue working at the original jobs of men in order to break conventional aspects and boundaries. The fact that women were allowed to carry out quite advanced tasks proves that men finally started to admit the high quality skills women portrayed when making delicate and important products. Adding on, women and men working together at the same job signals that women had come one step closer to gender equality and receiving respect from men. Lastly, it can also be said that women’s views on women were altered as well because women now had the mindset of breaking social norms rather than conforming to them and staying silent. To sum it up, the changes of women’s roles caused by WW1 had an enormous effect on men’s actions of conventionalizing the female gender.

On the whole, men’s views on the capabilities and rights of women changed extensively due to the roles and positions women had to take on because of WW1. Before the war, women were not granted the privilege of being able to vote, and were not included in ‘male topics’ such as politics, and were only viewed as housewives. Fortunately, women caught the opportunity provided by WW1 in order to prove themselves as equals to men, and toiled diligently to be a part of the war effort. Men soon realized the usefulness and helpfulness of women and granted voting rights, changed their stereotypical minds, and approved of women working in the workforce. However, women’s blood, sweat, and tears were not enough to 100% prove to all men that women and men are both equal, and to this day, women are discriminated because of their gender and race. When will gender equality finally be achieved? 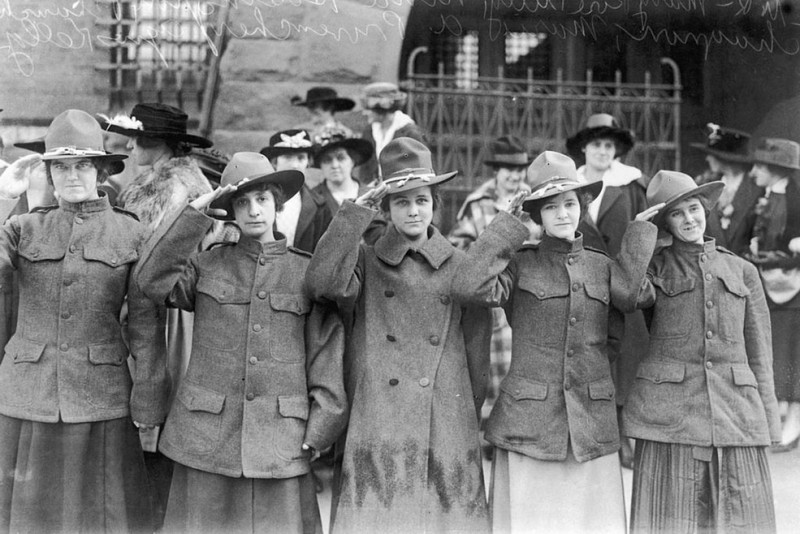 I wrote this piece after learning about how women from all over the world changed history by participating in World War 1 and significantly contributing to the war effort. As a young woman myself, I can only dream of the day where gender equality is finally achieved. Until then, I can only continue to advocate for it and fight for it.

Favorite Quote:
Live and hope for the best, but learn to expect the worst.

Favorite Quote:
"It would be impossible to forget me like your first love"