“Thou shall love thy neighbor as thyself” (Leviticus 19:18)
---------------
Racist parents raise racist children. Likewise, an intolerant mother fosters an intolerant daughter. My mother is intolerant of homosexuals. She raised me in a community that condemns them. We label our family as devout Christians and believe in Jesus’ admonition to love one another. That led me to the contradiction: are we or are we not following our religious beliefs by singling out one group for censure?

"Upon death," my pastor preached to his congregation, "gays, lesbians, and homosexuals will be rejected from the gateway into heaven, and suffer in hell." Such words of hatred made me squeamish, but others in the room enthusiastically responded with choruses of “Amen” and “Yesunim” (Jesus in Korean). I was taught in Sunday school that HIV/AIDS are God's punishment for a corrupt world. Back then, I pitied homosexuals because they lived in perpetual limbo, shuffled into a world that doesn't welcome them. I thought everyone agreed with my viewpoint. At least everyone in my church community did.

Earlier this year, the news of the California Supreme Court's decision to overrule Prop. 22 and allow gay marriage was received with shock by my church community. How could a marriage between same-sex couples be considered legal? I couldn't believe the reaction of my friends, who devotedly supported same-sex marriage. I realized that my town is extremely liberal: the student body at my high school even voted a gay couple as the homecoming “kings” last year. But legalizing gay marriage? I just couldn't believe it. In June, the initiative for Prop. 8, which would reverse the court’s decision, garnered enough support to qualify for the November election. Soon, nearly all the houses in Davis posted blue lawn signs that read, "No on Prop. 8." Rarely, houses displayed the yellow, "Yes on Prop. 8" pickets, but these were quick to get vandalized.
------------------
“Galatians 5:14 For all the law is fulfilled in one word, even in this; Thou shalt love thy neighbour as thyself.” (Galatians 5:14)
------------------
"I hope it passes," I remember mom telling me. I kept my silence; I simply didn't know how to answer. I had always believed that everything my parents said was true. But I doubted what Mom had to say about homosexuality. She told me no one's born “confused”; instead, homosexuality is a trend, and that many homosexuals think it's “cool” to be gays or lesbians. Somehow, though, denying someone’s right to declare love in public didn't seem like something God would condone. That night, as we watched the election coverage on TV, Mom constantly grasped her hands together in prayer. "God will direct it in the right way," she said. "Everything will be fine." With our eyes glued to the TV screen, we forgot to eat dinner that night. During a discussion in my English class the next day, everyone (including my conservative friend who supported John McCain) shared disappointment in California for supporting Prop. 8. I felt obligated to be the Lord's Good Shepherd and express a religious viewpoint, but I kept my mouth shut. Fear of being labeled a bigot was one factor but there was something else. I now had new doubts I needed to sort out for myself before opening them up to public scrutiny.

So what is “right?” If I were to renounce my Christian belief and fight for the legalization of same-sex marriage, I would be cast out of my parents’ Korean-American Protestant church as a sinner who left the Lord's path. At the same time, if I were to give in to Mom’s prejudice, my school friends would consider me an uninformed bigot. I was caught in an internal tug-o-war.
------------------
“If you really fulfill the royal law according to the Scripture, You shall love your neighbor as yourself.” (James 2:8)
------------------
Then, in late December, I witnessed a scene that clarified my view of homosexuality. A week before Christmas, I went to my coworker’s annual Christmas party. While chatting with one of the newspaper editors, I overheard Carol, a columnist, introducing her partner, Susan, to the guests. Carol and Susan are well known in our community, being the first homosexual couple to be married in Yolo County. In the middle of the night, when everyone stepped outside to admire the glowing Christmas decorations, I saw Carol wrap her arms around Susan and gently rest her chin on Susan’s shoulder. The couple shared an intimacy found only between two lovers, regardless of their age, race, or sex. But beneath their apparent happiness, I still felt their internal pain caused by societal disapproval.

Perhaps a narrow-minded community produces narrow-minded citizens. But I know I can break through that cultural mold and believe in what I think is right. People should be free to pursue anything they desire, whether it's an academic goal, personal ambition, or sexual orientation. In the past few years, we witnessed many homosexuals breach out of their shells of insecurity because the general public showed tolerance. Prop. 8, however, places a written law that not only eliminates the homosexuals’ fundamental right to marriage but also discourages their lifestyles.

It's ironic that we Christians attend church every Sunday, listening to the message of God and vowing to live for the purpose of helping others. Yet these same Christians exhibit hatred towards homosexuals. God created a world that welcomes everyone, and molded every individual as a unique being with purpose in life; homosexuals are no exception. Instead of searching for world peace or unity, people need to put aside their antipathy and accept, even if they cannot admire, the various forms love takes. Only thus will there be hope.
------------------
“Thou shall love thy neighbor as thyself. There is none other commandment greater than these.” (Matthew 12:31) 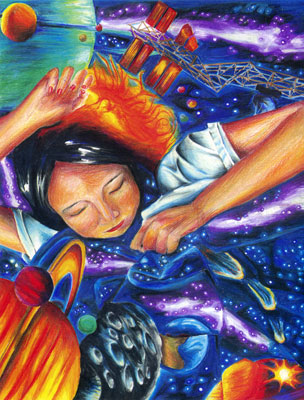 Favorite Quote:
"It's so hard to forget pain, but it's even harder to remember sweetness. We have no scar to show for happiness. We learn so little from peace."- Callow Lily, I think.

View profile
As for Dongeun, I commend and support your experience and conclusion. I realize that the experience you went through must have been very uncomfortable, and scary. It's tough putting yourself out there when you're facing opposition. Regardless, you courageously allowed yourself to look beyond preset boundaries so that you may have a better understanding about who you are and how you feel about these topics. Kudos.
Anne Powdris SILVER said...
on Jan. 28 2010 at 2:13 pm
Anne Powdris SILVER, --, New Jersey
6 articles 0 photos 35 comments
View profile
True. But have you ever wondered whether they are born with it or develop it because of the discouraging nature they live in? If you are a Christian at heart, would you not realize that God sent a man and woman to this earth, not a man and man, or woman and woman? Look back in history. Tell me what happened to homosexual tribes. Yup. Look where the pagans at Lut's time ended up. I do not know the Christian version, but I am sure that they were homosexual and ended dying painfully. Wouldn't you think that was a punishment for their horrid ways? I would think so.