the Fat Kid with Glasses

Favorite Quote:
Horace Mann: “Be ashamed to die until you have won some victory for humanity.”

I know this boy from school whose entire life has been one big walk down the gauntlet of life. He has an unspeakably terrible family life, including a mentally abusive older brother and a father who is in and out of jail. He has grown up timid and indecisive, and because of that, he can’t stand up for himself even in the simplest of instances. The saddest part is, he’s gotten to be so emotionally unstable that he actually breaks down crying at the drop of a hat. But who can blame him for being this way given the Hell he goes through at home?
Well, 99.9% of the student body has no idea about any of this, and so they just see him as an overgrown crybaby and the perfect target for their hurled insults. He has literally no real friends and the closest relationship he has with anyone is probably with the counselor at the middle school. But even she can’t help him now, because he’s a freshman and therefore beyond her reach. The only people he can turn to now are his somewhat acquaintances, which is where I come in. I am that 0.1% of the student body who knows of his problems and does not immediately condemn him for being insecure. I am the only one, and therefore he comes to me just for reassurance that he really is a person and not just the big loser everyone tells him he is.
In middle school, he endured daily insults, and quite often he was shoved around in the halls or kicked as he walked past. One day someone went so far as to stab him, right in the back, with an unnaturally sharp pencil. He had a deep, bloody hole in his back, and the most he did about it was cry and tell the kids at my lunch table what happened. No one but me even cared enough to tell a teacher, and I thought he already had, so nobody took any action. Looking back, I think he did tell our music teacher, but the guy just shook his head and backed off, because even he didn’t want to deal with this kid.
That same year, he had a taste of fame, but it wasn’t the type of attention he wanted to attract. At a spirit assembly, he was one of a bunch of kids participating in the games. In this game, there were about five lines of people who would, one at a time, run across the gym, sit on a balloon on a chair, and pop the balloon, running back to tag the next person. The object of the game was to be the first line done. Well, this kid was afraid of loud noises, and it took him about a full minute, with his fingers in his ears, to build up the courage to sit on the balloon. Embarrassed, he tried to run quickly back across the gym, but tripped and went flying through the air. He came down on his face, BOUNCED, and ended up skidding to a halt with his feet up in the air. The entire school laughed at him from the bleachers, and a girl got the whole thing on tape! As if it wasn’t bad enough that for the rest of year he was known as the fat kid who fell, this girl put her clip on YouTube! She then advertised her clip by word of mouth, and this rumor flew even faster than the one about a sixth grader being pregnant! Needless to say, he was mortified.
To this day, it still hasn’t changed. He still receives the same daily punishment for being different, and it sickens me to see it. And he still comes up to me from time to time just to talk or even just to say hi, because I’m the only one that won’t bite his head off as a response. What’s sad is that his questions are usually irrelevant and small, like “Did you notice they had pizza at lunch today?” to which I’ll reply “Oh yeah, they did.” What else is there to say? But I feel compelled to answer, just to let him know that I don’t despise his company. Today, though, I didn’t get a chance to answer. He came up to me and asked me why on earth I had dyed my hair black, that it had looked so beautiful when it was blonde, and now how would he find me in a crowd? What was I supposed to say to that? Before I could even answer him, however, he just shook his head and walked away.
As I write this, my keyboard is being quietly dotted with tiny drops of saltwater, and I hope that I have fully illustrated my feelings about this subject. This kid’s not so different than the rest of us; he just handles his problems in different ways. So please, keep an open mind, and an open heart. And remember, just because someone is different, it doesn’t make him less of a person. 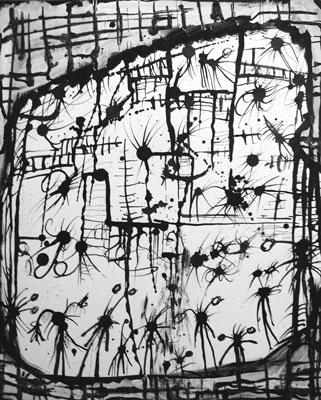 The author's comments:
Why is it that the fat kid with glasses is always the community punching bag? Is it because he's weak? Does it make you feel better after you've kicked him, smacked the bag of his head, tripped him, or STABBED him? Every time I think about this, I can't help but think of the Columbine shooting.
Post a comment
Submit your own

Favorite Quote:
"Don't waste your time, or time will waste you."

Favorite Quote:
my life isn't a book your writing don't tell me how to live it. I'm not a character or yours don't try to change me.

RealisticWoman BRONZE said...
on Jan. 27 2012 at 5:39 pm
RealisticWoman BRONZE, Nowhere Land, Alabama
2 articles 0 photos 16 comments
View profile
I loved the structure of her article. It is very easily read by teens better than just straight facts articles. I felt like I was actually sitting down and having a conversation with her. It was beautifully written I might add. And horrible for so many people to pick on that one kid. Big kids are just a bunch of soft cuddly bears waiting to be hugged.
amaranth178 said...
on Jan. 11 2011 at 12:53 am
amaranth178, Washington, District Of Columbia
0 articles 0 photos 118 comments
View profile
I appreciate the message of your article and I really see the need for action in situations like these, but I feel as if your 'Opinion article' needed a little more structure. You related events, but it was more like a conversation (which can be a good thing with fiction--not so much non-fiction, I think) than an actual article. Instead of launching into the entirety of his story from the beginnig, perhaps you could have taken a few key pieces and made a short but eye-catching introduction.
wespired GOLD said...
on Jan. 7 2011 at 4:34 pm
wespired GOLD, Circle Pines, Minnesota
10 articles 0 photos 28 comments

View profile
I can only speak about my own experience, but I can't beleive how close minded some people are. I used to be very obeise, then I joined Cross Country way out of shape and I used to play football where coaches and players discriminated because of my weight. I was told I would never be anything other than a lineman, and kids used to pick on me in class. Well then I joined Cross Country where I also knew there were people talking behind my back and then I lost 50 lbs. in a month and today I weigh only 160lbs. and am in very good shape and only have between 10-12 percent body fat and still have every ounch of strength left in me and can bench 215 pounds. Well now people respect me, now people love me, now people look up to me and wish they could be me and see me as the very popular person. I wonder and am completely flustered over the question of why am I any different then before when I weighed in the 200's. Why do girls crush on me and guys wish they could be me now. Why am I any different than I was many pounds ago????!!!!!! WHY?
Jenny C. said...
on Dec. 11 2010 at 2:57 pm
That is so sad...... i hope things work out for him
SecretNonConformist SILVER said...
on Dec. 10 2010 at 7:50 pm
SecretNonConformist SILVER, Marblehead, Massachusetts
6 articles 0 photos 195 comments

View profile
This is such a beautiful article! It's honestly, and sadly, so true! I'm glad you are there for this boy. He needs it!