Fixing Traffic: California Roundabouts for Efficiency, Safety, and the Future

Traffic is terrible. This statement is impossible to disagree with, and yet the American public is resigned to the permanence of sluggish commutes. Virtually every drive deals with lengthy intersections and dangerous accidents, and every day millions of Californians brave the clogged public roads and highways in order to go about their lives. Is this the way it has to be? No; it isn’t. There are many optimizations yet to be made, and many are more achievable than first thought.

In this essay, I argue that California should improve their small intersections through the implementation of the roundabout. I do this by first discussing the improvement to driver and pedestrian safety and efficiency, then I look at the financial benefits of roundabouts, and finally, I examine its enhanced compatibility with the autonomous vehicles of the future.

Before I begin, though, it is important to define what a roundabout is. According to the official California Department of Transit,

The modern roundabout is a circular intersection with three primary characteristics: (1) motorists and bicyclists must yield on entry (2) the intersection has a central island that deflects traffic and forces it to slow down, (3) approaches have splitter islands that separate entering and exiting traffic.

These characteristics make them distinct from four-way yielding intersections and traffic circles, which feature complete stops for half of the traffic that flows through them.

The first reason California should implement roundabouts is because roundabouts make the roads safer. Though various metrics of safety exist, this essay focuses first on the quantified impact roundabouts have on the safety of the drivers, before discussing the improved safety of pedestrians. The most common form of intersection in California today is the four-way intersection. These intersections are functional, but suffer terribly from one driver-caused issue: the head-on collision. In 2018, head-on collisions made up a bulky 57 percent of all fatal accidents, killing over 20,000 Americans. Roundabouts get rid of the possibility of a head-on collision by forcing all traffic into one direction: counter-clockwise. A dissenter might point out that not all head-on collisions occur at intersections, and that the implementation of roundabouts will not affect the death rates significantly. While the data is complicated by the scale of traffic infrastructure, the Federal Highway Administration (FHWA) estimates that “more than 50 percent of the combined total of fatal and injury crashes occur at or near intersections.” The data indicates, therefore, that the implementation of the roundabout at all four-way intersections would save at least 10,000 lives annually. But this essay is concerned only with implementation in California, so the real annual benefit would average at around 1,250 Californians saved per year. Data is limited in California on the impact of roundabouts on the state-wide population because there are so few roundabouts to gather data from. From the inferences, the impact is clear: roundabouts are safer for drivers.

But these data only concern vehicle-vehicle incidents. Many detractors of roundabouts claim that the increased risk for cyclists and pedestrians outweighs the potential benefits of roundabouts. In reality, the exact opposite is true. Once implemented, the safety of pedestrians is improved considerably, with a similar increase in safety for pedestrians and cyclists as for vehicles.

One metric traffic engineers use to determine the safety of pedestrians is their rate of compliance, or how likely they are to use crosswalks properly and wait until the intersection is clear and they are signalled to cross. A majority of all pedestrian injuries occur due to noncompliance (jaywalking, crossing when unsignaled, crossing too slowly).

While implementing laws to directly dissuade noncompliance (or protect those who choose not to comply) is beyond the scope of this essay, roundabouts do measurably reduce the likelihood that pedestrians become noncompliant in the first place. According to the California Department of Transportation, the average delay for pedestrians is directly proportional to the risk of noncompliance that intersections face:

According to the efficiency table provided by the California Department of Transportation, pedestrians forced to wait for over 60 seconds are at a “very high” likelihood of noncompliance, which renders them susceptible to vehicle-pedestrian collisions, which are often fatal. By drastically reducing the amount of time pedestrians spend idling at intersections, roundabouts greatly reduce the chance for noncompliant pedestrians, and therefore the chance of pedestrian injury.

Safety and efficiency are highly correlated especially for pedestrians, so it is difficult to discuss the two separately. High levels of pedestrians might still be problematic for the efficacy of roundabouts, though. Conclusive data collection on the impact of roundabouts on pedestrians is extraordinarily difficult. The United States lacks large roundabouts to collect data from (there are only 19 roundabouts in San Diego county, and all of them fall into the “small” roundabout class, decided by the California Department of Transportation), and systems engineering projects such as the FHWA’s Intersection Operation Analysis fail to account for pedestrian volume in their simulations.

In the end, what matters is that roundabouts are typically more efficient than four-way intersections, which is what the data indicates.

While efficiency data might remain inconclusive about large intersections, we do know that small roundabouts significantly decrease the amount of time wasted at intersections. The goal of these traffic systems is to completely eradicate the total stop of vehicles. At a roundabout that is receiving anticipated traffic volumes (traffic flow equal to the amount it was designed for), there are numerous efficiency benefits:

Traffic can move freely through roundabouts. This makes them more efficient than signalized or stop-controlled intersections. Unlike other types of intersections, roundabouts are designed to slow the speed of vehicles entering by deflecting them from a straight-line path into the roundabout. Drivers approaching the roundabout have time to judge for gaps in the circulating traffic and either yield or adjust their speed before entering the intersection. This allows for safer entries into circulating traffic.

The solution that traffic signal intersections use on the other hand—the red light—forces a large portion of its traffic to stop, so that another portion may drive through without slowing. This method, which puts its drivers at significantly more risk of fatal or injurious collision, is only fast for a portion of drivers. Four-way traffic signals often have a “priority direction” which is either green by default or receives much longer green lights, with the “opposing direction” signal forcing drivers to stop until they have fully arrived at the limit line of the intersection, where they are then sensed by the traffic system, placed in the signal’s priority queue, and eventually let through.

While this system works for large roads with largely unidirectional traffic flow, it ends up needlessly stopping the non-prioritized motorists in cases of even vehicle volume from all four directions.

The connected nature of traffic grids also opens up signaled intersections to many systematic failures. “Progression” is the term used to describe the movement of platoons of vehicles from one intersection to another. A well-designed series of intersection times up their lights so that a platoon of vehicles can progress through many green lights in a row, but a poorly designed one moves platoons from red light to red light, drastically increasing the wait-times experienced by the priority-directed and opposition-directed vehicles alike.

Roundabouts do away with the ‘platooning’ of vehicles entirely. Their first come first-served, drip-feeding design allows for traffic to spread out over time. This makes individual intersections less clogged, because vehicles get through the roundabouts at regular intervals (instead of dozens at once every green light). The trickled flow of vehicles from one intersection to another greatly increases the efficiency of roundabouts due to the increase in gaps that can be found within the intersection.

Every day, vehicles are forced to stop at intersections due to the primitive programming of traffic signals. Oftentimes, no other vehicle will ever cross their desired path before they are allowed to proceed through the light. These unnecessary stops would be completely eradicated in roundabout traffic systems, and they would save Americans significant amounts of time and more. Not only that, but roundabouts are safer for drivers and pedestrians alike.

The second major reason roundabouts should be implemented in small-scale intersections is because they’re cheaper:

While it is intuitive that an intersection without traffic signals would be cheaper, it is surprisingly difficult to pinpoint exactly how much cheaper. The cost of traditional traffic lights vary wildly as location and functional requirements change. The specific contractors available for hire at any given time also cause the price to fluctuate wildly. In Washington, the average cost of a singular traffic signal “costs the taxpayer $250,000 to $500,000 to purchase and install.” The cost of maintenance amounts to “about $8,000 a year.” Urban traffic development is priced similarly across the United States, so the cost estimates are generally applicable to San Diego’s developments.

At large intersections, the costs of installation and maintenance increase by double or more as they begin to implement more signals, signal logic terminals, and traffic poles.

These costs might seem miniscule compared to the massive budgets of government road and highway management services, but when one considers that California alone has hundreds of thousands of intersections, those costs add up, and we end up paying for them.

Roundabouts are a potential solution to this financial problem. The average roundabout costs approximately $250,000 to install, with annual maintenance costs being in the hundreds. The lack of expensive traffic signals (except in the case of high pedestrian traffic, where crosswalk signals are necessary) make these intersections resistant to natural disasters and extreme weather, further reducing their maintenance costs.

The final reason roundabouts should be implemented in small-scale intersections is that they are compatible with the future. Fully autonomous vehicles are coming. This is an irrefutable truth, but what can we do now to better prepare ourselves for their arrival?

Vehicle automation is complicated by the difficulty of its implementation. Autonomous vehicles will likely slowly fill California’s public roads, so for a time they will have to coexist with human-operated vehicles. Even when automated vehicles are eventually in the majority, there will always be human-driven vehicles on the road. The presence of even one manually controlled vehicle spoils the utopian efficiency of fully automated roadways and signal-free intersections where cars whip past each other in a perfectly calculated dance. Roundabouts serve as a perfect middle ground between the current reality and the utopian one. As the average car becomes more efficient, this gradient improvement will show itself clearly on roundabouts, since no vehicles have to stop.

Traffic signal-controlled intersections, on the other hand, force all vehicles to stop according to its signal, regardless of how safely and quickly those vehicles could clear the intersection. Automated cars are incapable of optimizing their travel through signaled intersections by design.

In conclusion, America’s deeply flawed traffic infrastructure could be improved through the implementation of roundabouts. Their use would make our roads safer, faster, cheaper, and ultimately capable of handling the traffic flow of autonomous vehicles. 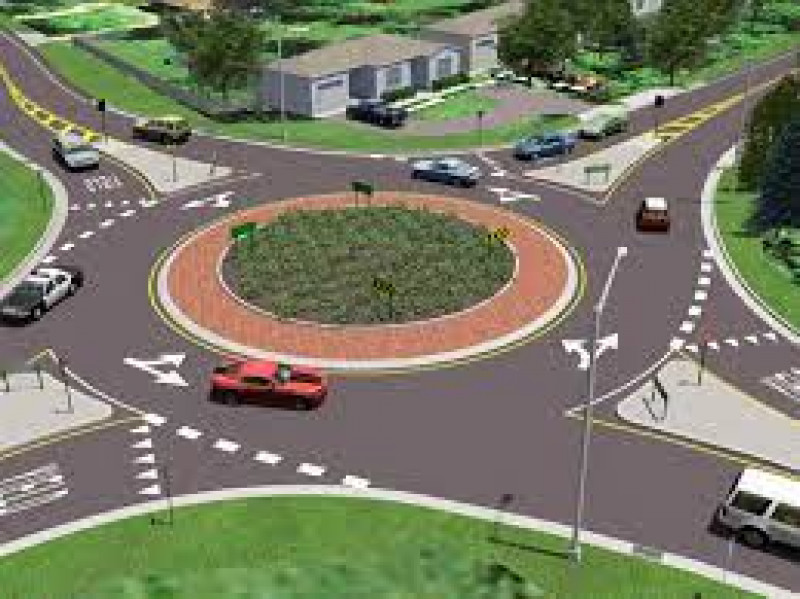 Braydon Owen is an upcoming prebusiness major at the University of Arizona. He is a California native.