Giovanni’s Call to Revolt: An Analysis of Nikki Giovanni's

In “For Saundra” By Nikki Giovanni,  the poet stands up against the status quo and calls for a revolution. Giovanni expresses the injustices the Black community has faced through a conversation with her neighbor who does not understand the way in which Black Americans see the world. Giovanni takes the reader on a journey as she personally grows and shifts her mindset towards actionable social change. The poem was written during the Black Arts Movement, which was born in the wake of the Black Power Movement; the mood of the piece mirrors the struggle that Black artists faced to be recognized for their talents. Giovanni juxtaposes her bleak view of the world with the colorful impression that her white neighbor has, which highlights the distinction between the lives of Black Americans and White Americans at the time.

Giovanni starts the poem by highlighting that her initial intention was to write a typical rhyming poem, one that fits in with societal expectations. However, she decides to stray outside the box. Giovanni states,

"i wanted to write

From the start of the poem, Giovanni alerts the reader of her objective to go against the grain. She initially “wanted to write a poem that rhymes” to fit in with the form of literature at the time because that would be the comfortable thing to do. Giovanni counters her point about writing a typical rhyming poem by saying, “the revolution doesn’t lend itself to be-bopping,” which highlights that in order to make a change, she must act out against the norms until society accepts Black culture. “Be-bopping,” which is Black vernacular English, describes the beat of music and alludes to the beat of a rhyming poem. However, a revolution requires a change of thought or ideas that do not follow a standard beat. Thus,  Giovanni wants to deviate from this standard beat, and create her own tune, which she does with this poem. She achieves this by writing in free verse, which was rarely seen in literature at the time. This daring structure corresponds with the strength of the Black Americans revolting against cultural hegemony in the Civil Rights movement.

Giovanni’s neighbor inspires her to write a poem about beautiful trees, but her reality is far from this utopia. In the poem, when her neighbor asks her, “do you ever write tree poems,” she describes that she enjoys trees and greenery, but the lens through which she views the world is not so colorful and hopeful. She states,

peeked from my window

to check the image

noticed that the school yard was covered

no green – no trees grow

Giovanni explains that she could write about a “beautiful green tree,” but that is not her reality. When she “check[s] the image,” she does not see the beautiful greenery that her neighbor describes. Checking the image symbolizes a reality check, in which she is able to see what life looks like for Black Americans in comparison to the life that her white neighbor lives. The neighbor’s lack of awareness of her privilege highlights the cultural hegemony within society, the segregation of culture, and the economic disparities between Black and White people. In addition, trees growing symbolize life and a breath of fresh air, but for Giovanni, “no trees grow.” This imagery tells the reader that Giovanni is suffocated by the system and the oppression she has endured, as well as highlighting her bleak reality. This reality is emphasized when she describes the schoolyard as “covered with asphalt.” The black cement, coupled with the lack of greenery paints a dire picture of life and changes the mood of the poem to reflect the emotions felt by Black Americans.  The despair mirrors the experience of Black Americans in the 1960s, a time when Black musicians and artists struggled to get the recognition they deserved due to the social construction of race that put white individuals on a pedestal.

In the last stanza, Giovanni calls for the revolution she describes in the first stanza, but instead of using words, she decides that a more effective way to create change is to take action. She says,

but clean my gun

and check my kerosene supply"

Giovanni believes that she should resort to taking up arms in order to be successful during the Civil Rights Movement. Her mindset switches from being a writer to a soldier, as the objective of achieving equality is worth entering the battlefield and putting her life on the line. Giovanni is an activist for change, and she concludes the poem by stating that “perhaps these are not poetic times at all.” For her, this is not the time to sit back and conform to society’s expectations. In order for her to see the trees grow, she must take action. Giovanni’s revolt highlights the need for change and gives hope to the reader, fighting against the people that adhere to racial realism. Giovanni is able to recognize that following the beat that is typical in society does not create equality for Black Americans. Giovanni’s call to revolution displays her protest of the social construct of race.

“For Saundra” calls attention to the racial injustices Black Americans face, and explains that in order to create change, one must take action and revolt. Giovanni veers away from the stereotypical expectations of a poem to establish her position as a freedom fighter who steps outside of the box to fight against injustices. She hones in on the idea that poets must do more than just write poems if they are to realize their maximum potential as black artists, which is why she calls for revolt against prejudice. Richard Nixon, who was president at the time the poem was written, was notorious for supporting injustices against black people. His contributions to their plight resulted in Giovanni calling for this revolt. Although she urges for change, history sadly repeats itself. Decades later, black men and women are still facing racial injustices under the previous Trump presidency. However, there is hope. The Black Lives Matter movement parallels with Giovanni’s desire to effort change and gives the reader hope that beautiful trees will grow. 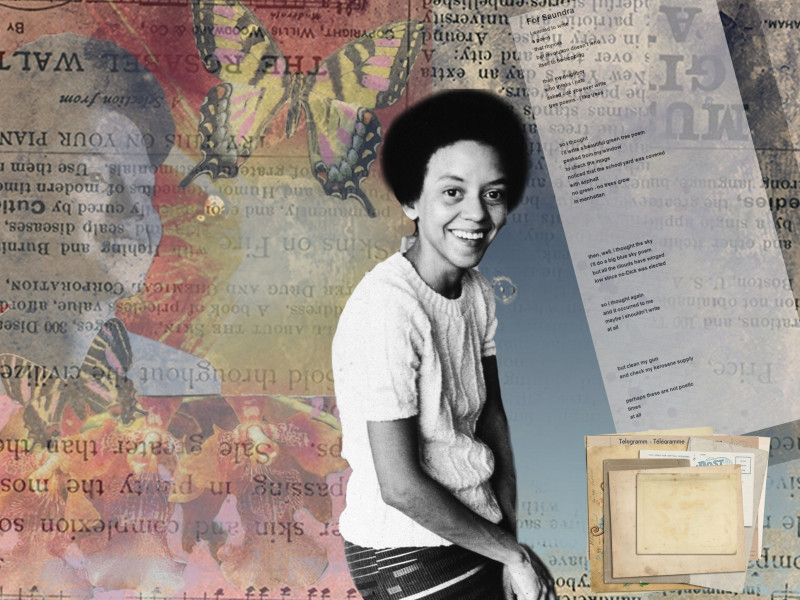 I focused on Nikki Giovanni because of her large role in the Black Arts & Power Movement, and how she went against the grain as an author with her verses in her poems and with her message. I aspire her strength, courage, and commitment to social justice.