The Book of Genesis' influence on | Teen Ink

The Book of Genesis' influence on

Angels for the Altruistic, Demons for the Deceitful and Disobedient

In Judaism, the concept of demonology is displayed through literature because of its presence in traditional Jewish Scripture. Jews and the people of Israel believe in demons as figures who inflict sickness on others and come from murky places, such as deserts or ruins but their spirits are sent by God. Within Demonology, there are angels and demons, and when comparing stories from the old Genesis to the “Mirror” by Isaac Bashevis Singer, it is clear that those who commit sins are punished by demons being sent by God, whereas those who are selfless are met by angels. The existence and roots of Demonology in original Abrahamic scriptures, such as the myriad of stories in the Book of Genesis, ultimately lead to demonology permeating through literature and other Sectors of Society.

In the Bible (Book of Genesis Chapter 32), Jacob encounters an Angel sent by God and his purity is put to the test. He tells the messenger, (the angel), that he has acquired sheep and other cattle to become favorable of God. The messenger tells him that he has brought his brother, Esau, to the land. Jacob becomes extremely nervous but ultimately does the right thing. When Jacob finds out his brother is in need, he puts beside his previous conflicts with his family and gives Esau a myriad of cattle as a present for him to ultimately prosper. This was a representation of Jacob’s purity, so he fights the angel and sustains an injury. By sunrise, he has a new name, Israel, which means ‘he who wrestles with God.’ He is named this to represent the entirety of the people of Israel, as he embodies the idea in Judaism, that one will overcome struggle by doing good deeds. However, one who is narcissistic and selfish, which is not acceptable in the Jewish community, has to face demons and evil spirits as God punishes the self-absorbed. In the Bible, (Book of Genesis Chapters 1-11), God created humankind and forms a man out of dust whilst a woman is formed from that man’s ribs. Nevertheless, Adam and Eve are placed in the idyllic Garden of Eden, where they are allowed to exist freely but are strictly forbidden from eating from the tree of the knowledge of good and evil. Although advised not to, they listen to the serpent who convinces them to eat from the tree. God curses the serpent, Adam, and Eve. Adam is cursed to toil and work the ground for food while Eve is cursed with painful childbirth while having to submit to her husband’s authority. They are both banished from the Garden of Eden. The contradiction between the story of Adam and Eve, and the story of Jacob becoming ‘Israel’, shows the clear presence of a moral code of good versus evil and selfishness versus selflessness. God intervenes and sends demons to punish and angels to reward.

When reading Issac Bashevis Singer’s short stories, the same moral code exists as expressed in the Judaic scriptures. The main character Zirel, in the story The Mirror, is a most narcissistic woman. While looking at herself in her attic mirror, unbeknownst to her husband, she dreams and fantasizes about her body. She is consumed with her sexuality, hence, the title, The Mirror. This self-admiration is forbidden in the Jewish religion. Zirel lives in a small town, where the people are willingly obliged to fulfill their religious rituals and daily work duties, they have a strict moral code that they follow. She does none of that and she looks down on them for their rigidity. What happens next is very much a consistent theme in Isaac Bashevis Singer's short stories; if you sin, you will suffer the consequences. The Imp temps Zirel and she gives in to her impulses and desires, resulting in her enduring the wrath of the Demons… enter the fulfiller of sin, the Devil. Zirel gets sent to hell for giving into her temptations; the result of Zirel giving into temptation relates back to an old Jewish expression “temptation makes Steve’s.” Much like Adam and Eve, Zirel gives in to temptation and is banished from earth and punished for eternity for giving into temptations over following the rules sent by God and the rules embedded in Jewish culture.

The idea of good and evil throughout Judaism is the basis of what forms demonology through many sectors of society, but especially literature. Isaac Bashevis Singer plays on the traditional Jewish idea of being selfless; one who does good deeds for others and listens to God’s rules will be rewarded whereas one who is self-absorbed and goes against God’s will gets cursed and is punished by evil spirits, usually sent by god. However, I find it interesting that in traditional Jewish scriptures, which is what our Judiac morals are sculpted from, women are subservient to the men, as the traditional scriptures have built the stereotypes that women commit more sins. In Adam and Eve, they both eat from the tree of knowledge of good and evil, but it is clear Eve gets the bad end of the stick, as she will have to submit to her husband's authority while also having a painful childbirth. This punishment was significantly worse for Eve because she is a woman committing a sin. Nevertheless, Singer's story, “The Mirror '' also adheres to this idea of women committing sins in traditional scripture. I think this relates to the role of the wife in many Jewish households, as women are usually the ones organizing gatherings, cooking, and giving back. Traditional Judaic scriptures have formed the idea that one should give back and listen to God to avoid evil spirits and demons, which has permeated through Jewish literature and Yiddish scripture. When comparing the stories in the book of Genesis and “The Mirror,” it is evident that evil spirits are sent to those who commit sins, while the pure are rewarded by angels. 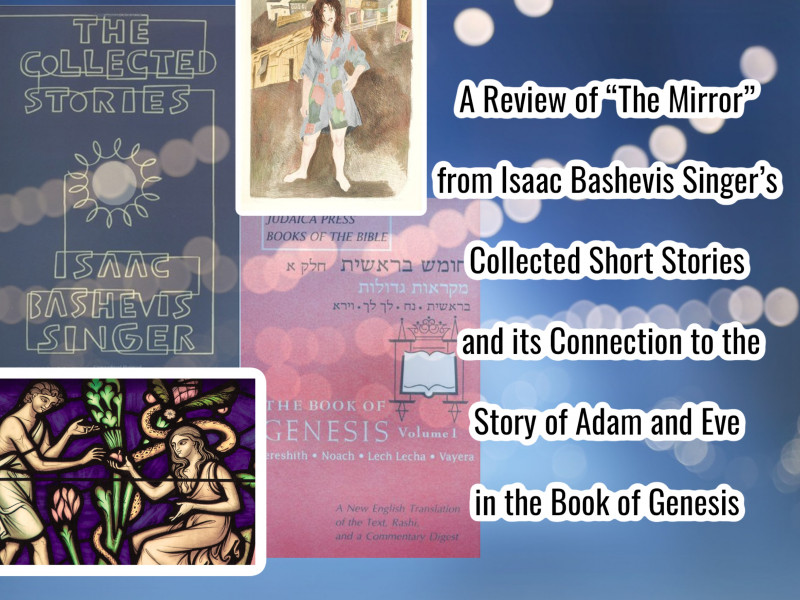 Gender is a present theme as it is shown throughout many stories, like “The mirror,” as many traditional views of Judaism (as seen through the Torah) state that women commit sins more often and are punished for self-love and affection. However, I mainly tried to convey that in Judaism, one is cursed because they have sinned, which is when an individual is self-absorbed and disobedient, whereas a good person in the Jewish community is sent Angels for being selfless and caring. Jewish Demonology and how it has permeated through sectors of society (mainly literature) because of the presence of good and evil spirits sent by God in the Old Testament and the Book of Genesis. Therefore, I used “The Mirror”  to show how when Zirel doesn’t listen to the rules within the Jewish community, she gets punished for it. I further emphasized the idea of punishment due to sinning through the Story of Adam and Eve in the Book of Genesis. Conversely, I implemented the Story of Jacob into this opinion-based written work to emphasize the concept in traditional Judaism that when one follows the request of god, they will be rewarded.

Favorite Quote:
Love is a temporary madness. It erupts like an earthquake and then subsides. And when it subsides you have to make a decision. You have to work out whether your roots have become so entwined together that it is inconceivable that you should ever part. Because this is what love is. Love is not breathlessness, it is not excitement, it is not the promulgation of promises of eternal passion. That is just being "in love" which any of us can convince ourselves we are. Love itself is what is left over when being in love has burned away, and this is both an art and a fortunate accident. Your mother and I had it, we had roots that grew towards each other underground, and when all the pretty blossom had fallen from our branches we found that we were one tree and not two."

Favorite Quote:
"It is a truth universally acknowledged that a man in good fortune must be in want of a wife." -Opening Line of Pride & Predjudice

Favorite Quote:
"Don't be ridiculous. You have no right to barge into people's castles and take their guitars." -Howl's Moving Castle