The World Is Not Enough | Teen Ink

The World Is Not Enough

This week in our World History class a Buddhist came to speak to us about his religion. We'd just finished studying the origin of the main religions , including: Christianity, Judaism, and Buddhism. To gain a more personable and life relating knowledge of these religions, our teacher invited guests speakers of various religions to share their personal practice of their religion and to answer personal questions which vary from individuals.


This had been our second speaker. The last had been a practicing, but non-orthodox Jew, had been very informative, but not as direct or clear as Mr. Bud, we'll call him for this article.


Anyway, Mr. Bud was quite the speaker. He spoke like a history teacher; he paced with purpose, gestured with grace, and showed eye contact without intimidation. He was a natural with words and was easy to understand. He gave us the basics of Buddhism and told of how and why he'd become a Buddhist. He was also honest and treated us as equals. He explained that Buddhism, at least to him, was not a religion as much as an attitude, a way of life. It was an attitude of respect and of learning to help yourself first, in order to be able to help others second. Because if you haven't learned to love or respect yourself, how could you possibly love or respect others?


I'd say more but I'd feel more critical than already am and that I was talking behind his back. So instead I'll jump to the end of his lecture when he encouraged us to ask questions.

But, first I’d love to state that I am a Christian, my mother's family is Catholic and my step father's is Evangelical, and as a family, we recently became Baptist. This may be a subdivision of Christianity but we simply believe in God, hell, heaven, baptism as an act of faith before others, and that the Bible is the word of God and we should live by what it says.


So believing in all these things, I asked how he explained creation, our purpose and reason, and how he defined morality; these are the tough questions that I believe a true and complete religion would clearly and directly answer -that's why I am a Christian.

Now this was more of less of Mr.Bud's response, not word for word, and not precisely put:


Well what is morality? That is the question we must ask, the perfect question for a World History class. Isn't morality what we consider right and wrong

-as a society? Is it not rules that are set upon a society that change according to the culture and the time?


Our reason is the moment, our goal is to become better every day. Not to be crappy one day and great the next, to be consistent in our character. Our goal is to meditate and become the best we can be, to help ourselves, in order to help others. Our goal is to improve in order to reach a higher level of reincarnation in our next life.


Creation is a beginning; what is the beginning? When is the end? There is neither. There is just now; everything before and after that is continuous. Time is infinite. We've always been here, we'll always be here.

Sorry, not good enough and I told him so.

Okay, maybe your partially correct, society creates the definition of what's right and what's wrong. That's what laws are voted and established for. As for reincarnation, hey, I hope your not a donkey your next life.


But the creation, the creation of man and what man is and represents, to say it always has been, it always will be? The second law of thermodynamics states that everything winds down. Nothing lasts forever, even scientifically, the sun will stop burning one day and end vegetation and thus life on earth.

If nothing has a beginning, then how is it that his religion hasn't always existed? Before the Siddhartha Guatama, the Buddha, you had no religion. Without the Siddhartha, you wouldn't be here, arguing that there is no inception and no end. Therefore, there was a time before your religion, and your religion, along with everything else has a history, an origin, a past.

And tell me, who created the Buddha?


He answered my questions with more questions. Some of my friends had told me I'd been close minded that day. Others had told me there really is no beginning and no end. How can you believe that? What do you live for? What motivates you? What keeps you breathing, when all you can ever be and do will become dust, dirt, nothingness? "That's what it's all about, nothingness, being nothingness”, Mr. Bud had said, "It's not a black and white religion, it might be confusing for some people."


Black and white. Your telling me I'm close minded, when I'm looking for the truth. In the words of James Bond, "the world is not enough" to begin with, but then to believe that there is no reason, nothing more, nothing bigger than ourselves and our egos and our knowledge that we know nothing, it's unbearable. To accept that we originated from a coincidence, that we've always been and always will be, is to accept pi as a precise and whole number answer.

For me God and the Bible explains everything. It makes sense, there is no fill in the blanks and guess what might be wrong and right; guess where you'll go after you die; guess whether you came from monkeys or nothingness. Just guess is not enough for me.

And please, for you evolutionists, there is no way that Sean Connery came from a monkey. 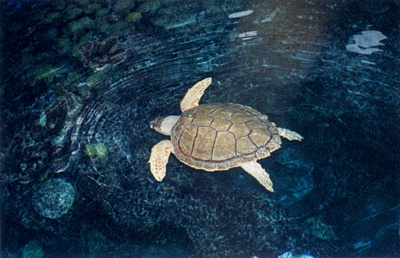 Favorite Quote:
Some say the world will end in fire,
Some say in ice.
From what I've tasted of desire
I hold with those who favor fire.
But if it had to perish twice,
I think I know enough of hate
To say that for destruction ice
Is also great
And would suffice.
-RF

Favorite Quote:
"If you do not love God then you do not know God for God is love" 1 John 4:8

View profile
pretty awesome i have to say! =) Give me hope that i'm not the only christain teen who had to do something like this
SkyDeer PLATINUM said...
on Dec. 17 2010 at 10:02 am
SkyDeer PLATINUM, Mebane, North Carolina
20 articles 19 photos 49 comments