A Colonist Speaks Out | Teen Ink

A Colonist Speaks Out

Favorite Quote:
"People may hate you for being different and not living by society's standards, but deep down, they wish they had the courage to do the same."

It wasn’t too long before we settled
in a country that had not been meddled;
It seem as though there were plenty
of crops and goods for Mister Penn-y;
We had longer seasons for crops
down  in the middle colonies.

But if you’re a witch,
you have committed felony!
Burned at the stake,
another life we take;
You have sinned in the minds of us
and this was a subject not left to discuss.

Before long women and children
were to cook and clean in the building;
But on Sabbath, no one plays,
at home with the bible everyone stays;
Protestant, Catholic, or Jewish,
everyone was srewish,
towards one another for their choice.

Black, beige, tan or otherwise,
you are a sore to all the eyes;
We do not welcome people of color,
we often think of them as smaller.

For down in the middle colonies,
cash crops were hot comodities;
Selling one after another,
tell me, did I stutter?

Get back to work, don’t be pittish,
you’ll never be like us, the British;
The soil may be dry,
but do you want to be like Bligh?

Let’s take a moment to reminisce,
while we look at the oceanic abbys;
The day we arrived
was but a surprise;
The Indians were angry,
they tried to hang me!
But now that we’ve somewhat bonded,
we have indeed successfully founded,
the new home of the undaunted. 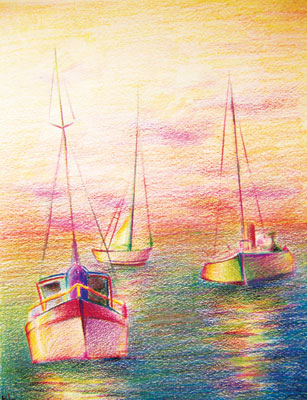 This piece is inspired by the Colonial period of America, when the settlers first came.