Hmm...where do I even begin

The man who hurt me! Abused me! Stole from Me!

Naw..how about I start where I was told to shut up or he was gonna tell mama on me

Manipulated and fooled at only six years old, truth be told.

Crazy how it was men I trusted, who were considered my family, who I said “I love you” to

Thought that if I kept the secret it would lower my mama’s worries, knowing what she been through

He rubbed and gripped..and then things escalated.

And while I meditated on the idea of this being the father-figure I chose.

I do fear my past but I'm not afraid to admit it...why?

And yes, I do struggle with the pain and the tears and the hurt

Only because I know it will never be the same

That fool had me questioning my worth!

Tell my story, the untold, how my purity was ripped out.

It sucks. It does. Cause now I'm forced to just sit up and wonder if he even thinks about the naive girl he slaughtered or if I was just another “little thang” he conquered

My past is already shown through my maturity

I understand this may be uncomfortable for some

Even though uncomfortable is an understatement

And I'm not doing this for no entertainment!

I'm doing this to show my worth..since I was birthed on this earth!

And I'm proud to be called Aaliyah, why?

Because it means blessing

And that's exactly what I'm going to be for those who might so hear me.

I feel like I'm stuck in an endless game of guessing

But one day I will be set free.

Even though I continue to go through the series of questions that I know won't get answered immediately.

At such a young age?

Did I turn him on?

Did I lock myself in that cage?

NO! I was subjected to it.

And you know what?

I will not be silenced!

Don't you ever whisper!

That's how the truth will be stated 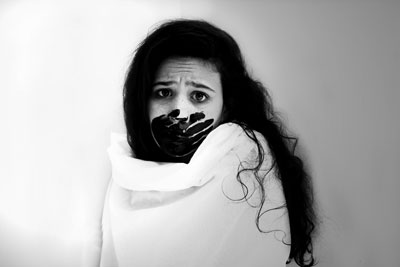 I am an 8th grader from the state of Illinois. I was recently involved in a speech competition called Operation Push hosted by Jesse Jackson. The speech I did was Cicely Tyson's Monologue from Madea's Family Reunion. I love poetry and this piece, Silence, I wrote about is something very personal to me and my family. As a 14-year-old girl, I feel that at any age no one should be silenced or bottle up any emotion for anybody. I am aware of any negative reactions that can come with me putting this specific piece, but I'm also aware of the one person I might inspire. Don't stay quiet, let your voice be heard.