A child sits on the front steps of his house, watching the world sleep. His shoes are scuffed, and wet snow seeps through the seat of his trousers.
A dragon’s breath shows silver in the dark.

Each star could be it’s own universe; just bright enough to conquer the night, and distant enough for miracles. Who can tell if the reward exceeds the anticipation? Who bothers to notice, when every moment is sweeter than the one before, and the expectation of magic never disappoints you?


A young man sits on the front steps of his house, watching the world sleep. His nose is pink, and his mouth tastes sweet with familiar dissatisfaction.

The Church bells are sad, and the snow is cold and indifferent. How shallow is the ice, that sparkles without meaning? His well-trained intellect searches for a deeper message,
but blank whiteness smothers the truth in irony.
The sky is vast and majestic, but he wonders, couldn’t it be closer? Unaware, he looks for a single star to outshine the rest; an unnatural radiance.

If he could find it, he would make a wish.


An old man sits on the front steps of his house, watching the world sleep. A chuckle is silent in the base of his throat.

Still he waits, where he has waited before, because
who has been able to find everything they looked for, in truth?
How blessed are those who search in lies, and can be satisfied.

For the rest, though,
this man has found that magic can be discovered in the tension that livens his hollow body in the absence of perfect contentment; in the excitement, anticipation, superficiality, frustration, and laughter that swirl in dizzying circles with the snow.


What is hope, but persistent expectation? 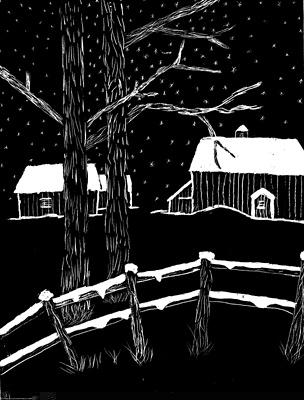 iDogrocker said...
on Aug. 8 2010 at 8:37 pm
iDogrocker, Lebanon, Oregon
0 articles 0 photos 78 comments
View profile
I love this progression!! It's told like a story, which is something I can definitely relate to. I've never been good at poetry, and reading the work of someone who is can be rather refreshing. This is a great idea and a well done piece.
Still_Waters26 SILVER said...
on Aug. 8 2010 at 7:16 am
Still_Waters26 SILVER, Ladysmith, Wisconsin
6 articles 0 photos 88 comments

View profile
Very interesting.  I like how it moves from the boy to the old man, a huge contrast which I think is good in poetry.