Favorite Quote:
One day your life will flash before your eyes. Make it worth watching.

She was a girl who loved adventures, says the
Holes in her overalls that were naturally worn;
A creative girl too, says the
Chipping paint that was once beautiful;
And a girl who could look pretty too, says the
Frayed ribbons on the floor
That still had creases from when they were tied tightly;
But she wasn't a social butterfly, says the
Pile of books with breaking spines
And the diaries that were overflowing with the stories of her life.

But she wasn't alone, says the
Doubled pair of shoes with worn soles;
They made this place cozy,
With fluffy beanbag chairs.
They were practically sisters, says the
Many framed pictures along the walls,
And the matching t-shirts in a pile.
They were alone here, says the long, wooden ladder.

Something happened here, says the
Teardrop stains on a weathered picture.
The many books say they weren't social;
The broken frames say that something hurt her.
And the other? Her stuff was left alone
Like it was done in memory – the chairs,
The clothes, the pictures.
Something broke her heart, they say. 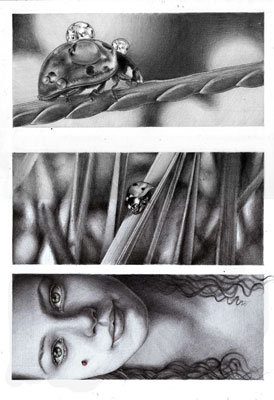 Favorite Quote:
If nothing else, believe in art.
~Unknown

View profile
I love all your work, but I think this one is my favorite!