Favorite Quote:
“You only live once, but if you do it right, once is enough.” -Mae West
"It had long since come to my attention that people of accomplishment rarely sat back and let things happen to them. They went out and happened to things." - Leonardo Da Vinci

120 pounds - fairly normal for a height of five foot eight

But not the voices in her head.

Watching as shine fades away, the glitter in her eyes lost,

marks appearing on her skin.

Shaking with a desperate glee as she tells me

she found a new way to get rid of the fat.

not my words, nor our friends, or even her boyfriend's.

Her body shrinks and shrivels day after day,

puking out what little goes in

hysterical when the suggestion of stopping the diet comes up.

Her parents long since given up,

focusing more on the little sister,

friend after friend leaving out of exasperation and

Until only I am left, but she is nothing but a shell,

less than a shadow of her former self

always during class and lunch time,

muttering in that high strung voice while shaking.

hair falling out, screaming during phone calls at 3am

until she's finally in the hospital.

And I haven't seen her since. 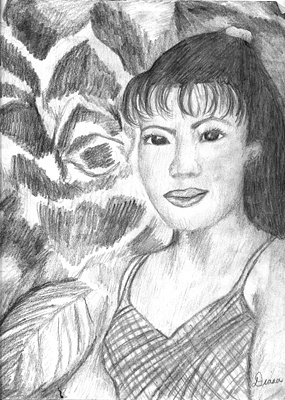