A Review of Isaac Bashevis Singer's Speech at The Nobel Banquet

In Singer’s Nobel Prize-winning speech, Issac Bashevis Singer canvases his passion for Yiddish and the importance of its liveliness in the literature world. He stresses the importance of writers in a developing society and how we must cherish literature for the myriad of ways it tells stories and real-life experiences. Singer brings up vigorous points surrounding the importance of keeping the Yiddish language alive. He said, “The truth is that what the great religions preached, the Yiddish-speaking people of the ghettos practiced day in and day out. They were the people of The Book in the truest sense of the word.” Singer brings up how this is the language that kept people alive during the hardest parts of the Holocaust. Even in the ghettos, they practiced it “day in and day out.” I believe he is discussing how we must keep the language alive, as it’s what our ancestors spoke, and we must honor them. They are the people of the book because they stayed strong during times of upheaval, and as a Jew, I view them as my true heroes. They fought every day for their lives and that’s what strength and the fight for life looks like. A language, whether it’s written or spoken, is what keeps culture alive and is what gets people through the hardest of times. This is why Singer stresses the dominance of literature and the fact that we must keep it alive as it was our people’s only source of relief. If they had trust in literature and language, so must we. The way Singer ends this piece shows the true intimacy behind his writing and the importance of continuing traditions, which means continuing the language of the forgotten-- Yiddish.  He ends the speech by saying, “Yiddish is the wise and humble language of us all, the idiom of frightened and hopeful humanity.” When he says it is the “idiom of frightened and hopeful humanity” he means that when Jews spoke Yiddish, which most of the German guards could not understand, it gave them hope that there was still a world where they belonged and where they could practice their culture. Since many of them did not make it to the hopeless humanity they dreamed of, we must keep this language alive in their honor because it is what strengthened them to have hope during the darkest times,

The idea of the following tradition in the names of the lost Jewish members due to society is an important idea for our course. Singer also describes how we can do this, which is through literature. This idea is what our course is merely centered around, as we read to understand Jewish culture and tradition from a myriad of different viewpoints. As a class, we are doing what’s important to Isaac Bashevis Singer and to the 6 million jews viciously murdered in mass genocide under the Third Reich. We can expect that through Singer’s writing, we will hear about the importance of Yiddish as a modern language while keeping Jewish tradition alive through literature. 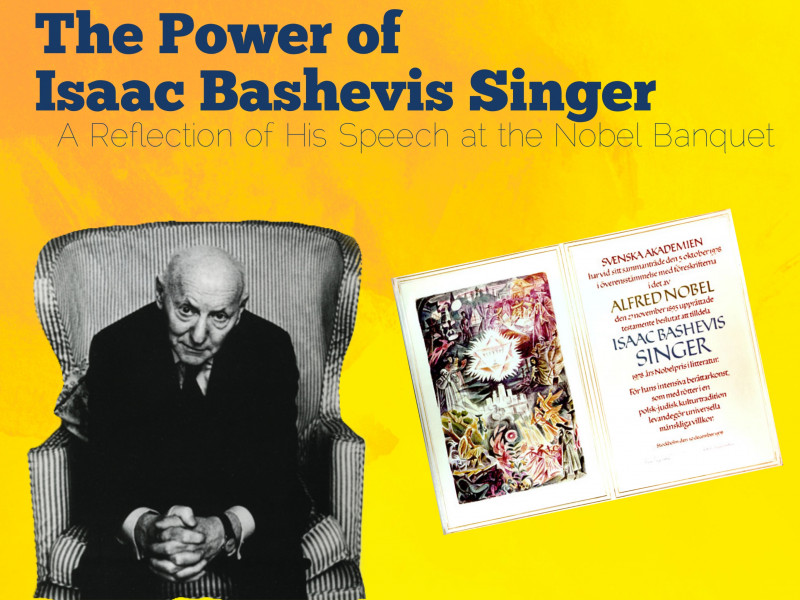 I wrote this review on Singer's speech to accept his Nobel prize because he is a true inspiration to me, and has been a true activist for the Jewish community.