“Daddy” by Sylvia Plath explores the oppressive relationship between Plath and her father caused by society’s patriarchal structure that deems men as more powerful than women. Although her father died when she was young, Plath continued to live in the shadow of his abusive nature. She uses the poem to express her anger and to stand up for herself. Sylvia Plath explores the interaction between men and women and how the traditional gender roles result in her oppression under her tyrannical father, leading her to liberate herself and regain her power.

In each of the short stanzas, Plath uses strong imagery to detail her oppressive relationship with her father and her resentment towards him through metaphors, similes, and rhyme schemes.  Plath begins the poem by alerting the reader that she is trapped. She says,

For thirty years, poor and white,

Barely daring to breathe or Achoo.

Plath uses the “black shoe” as a metaphor to introduce the readers to her father. By using the color black to represent her father gives a clue into his intense, dark, and joy-draining behavior. The purpose of a shoe is to protect the foot, and when analyzing traditional gender roles, it is the father who is protective, strong, and authoritative. In the poem, the shoe mirrors the traditional gender role that a father has in his daughter’s life. However, Plath’s use of imagery presents the shoe as oppressive rather than protective. In the first stanza, Plath protests against the shoe, in which she has “lived like a foot.” This simile represents how her father’s male dominance has left her feeling trapped. She describes that for three decades she has been scared to even breathe, highlighting her father’s dominating and oppressive behavior. Her fear also reaffirms her traditional gender role, in which females are timid and weak. Although her father is long dead, she is finally able to fight her traditional gender roles, breaking out from the black shoe.

Plath seeks liberation from her father’s oppressive nature and she concludes that the only way to achieve this, is to metaphorically kill him. Plath announces, “Daddy, I have had to kill you.” We learn in the poem that her father is already dead, but she needs to liberate herself. At this point, Plath is gaining back authority in her life, escaping from her father’s dominating grasp. Plath’s relationship with her father can also be seen as a reflection of the patriarchal society, in which men and women are not equal. In a patriarchal society, men are on a pedestal while women are put in positions of subservience, which is clearly reflected in the poem as Plath is oppressed by her father. In Lois Tyson’s “Feminist Criticism” chapter, Tyson explains that patriarchy “exerts force [and] undermines women’s self-confidence and assertiveness, then points to the absence of them as proof that women are naturally submissive” (Page 82). In the first two stanzas of the poem, the reader immediately gets the impression that Plath was undermined and submissive to her father. By saying “I have had to kill you,” Plath goes against the traditional gender roles and becomes assertive to regain her power. By metaphorically killing her father, Plath is a recovering patriarchal woman, as she reverses the effect of the patriarchal ideology in order to liberate herself.

Throughout the poem, Sylvia Plath explicitly and implicitly exposes gender roles through literary devices and historical context. Plath compares her relationship with her father to the Nazi regime. Plath says,

An engine, an engine

A Jew to Dachau, Auschwitz, Belsen.

Plath compares herself to Jewish victims of the Holocaust to emphasize the suffering she has experienced under her father. She compares her father’s power to a machine when she describes him as an engine, reinforcing the traditional gender roles and male dominance. Plath uses onomatopoeia with the word “chuffing” to illustrate the trains that Jews were forced to take to the concentration camps, and she lists infamous concentration camps to show how she was persecuted by her father, similar to the millions of Jews who were sent to the camps. The train also represents her confinement by her father. By identifying herself as Jewish and her father as a Nazi, Plath highlights her weakness and vulnerability and her father’s tyrannical nature.

“Daddy” by Sylvia Plath highlights how the traditional gender roles put women in positions of subservience, leading them to feel trapped and confined. However, Plath is able to escape her father’s confinement by metaphorically killing him, challenging the traditional gender roles that describe women as weak and powerless. Plath may be seen as hysteric to the public eye, but her poem “Daddy” was a bold statement in the feminist movement, as it exploited the fact that a father’s instinct to play the protector over their daughter leads them to feel trapped rather than protected. The alpha-male tendencies of a father are what continues the patriarchal structure in society today, as it reinforces the traditional gender roles that deem men as the protector. 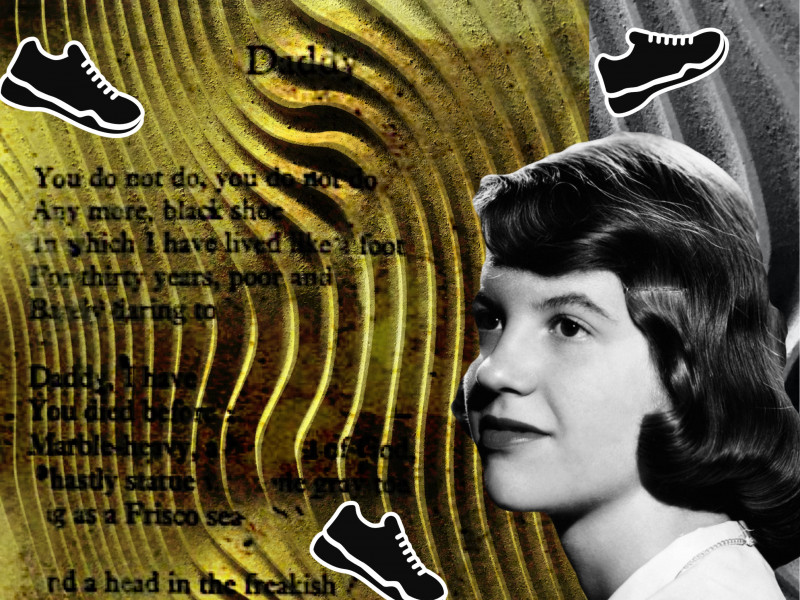