The Crowd: A Study of the Popular Mind is a book written by Gustave Le Bon, the French social psychologist, and was first published in 1895. The Crowd is one of the best-selling books, and its influence stretches to the present day because of its strong opinions and claims. In the book, Le Bon claims that there are several characteristics of crowd psychology: "impulsiveness, irritability, incapacity to reason, the absence of judgment of the critical spirit, the exaggeration of sentiments, and others.”

The main theories of Le Bon are that the crowd is unconscious, the crowd needs a common illusion, and the extremes of the crowd.

Before we discuss the unconsciousness of the crowd, we need to know what a crowd is. According to Le Bon’s definition, a crowd is not some random gathering of people in a place; a crowd is a group of individuals united by a common idea, belief, or ideology. The idea which unites a crowd is not chosen by a process of clear reasoning and examination of evidence. When an individual becomes part of a crowd, the person will undergo a profound psychological transformation. The individuality of the person will disappear, and the person will become unconscious. The personalities and intelligence of individuals are erased in the crowd. With such a psychological transformation, an individual no longer lives for himself, and an individual will act differently from the state of the individual. Le Bon notes, “In a crowd, every sentiment and act is contagious, and contagious to such a degree that an individual readily sacrifices his personal interest to the collective interest” (p. #).

"One of the most constant characteristics of beliefs is their intolerance” (p. #). Beliefs or religion is a type of illusion, and as Le Bon says: "The masses have never thirsted after truth. Whoever can supply them with illusions is easily their master; whoever attempts to destroy their illusions is always their victim." People that have different beliefs are whoever goes against or destroys the crowd’s illusion. Thus, “The stronger the belief, the greater its intolerance” (p. #). This explains why a crowd is so extreme and stubborn.

Before anything, the crowd needs a “God”, a belief, or a common illusion. People need God and their faith to give them a commitment, to let them feel relieved from the cruel realities. We, humans, are weak creatures who can’t handle the pale reality of truth in the world.

Even though the Middle Ages (an era dominated by religion) have passed and we claim our present era as an era of rationality and science, nothing has changed in reality. People are simply changing their previous worship, obedience, and belief in Christ to science, freedom, or even celebrities. Science has become the new belief, and the Scientists have become the new “god”. Our desire for faith has never changed. "If atheism spread, it would become a religion as intolerable as any of the ancient ones" (p. #).

Everyone is a slave to something: the crowd is a slave for their illusions and their truths. To enable them to find their “truths”, they need a leader who has a stronger faith than them. The crowd’s leader is “acclaimed as a veritable god,” holding the power to sway over the crowd’s imagination by “devising new formulas as devoid as possible of precise meaning,” thus taking on whatever meaning the follower invents. At the same time, the leader destroys all the rivals with claims that lack substance “by dint of affirmation, repetition, and contagion.” Successful leaders like Hitler turned themselves into the faith of his crowd. “The tyranny exercised unconsciously on men's minds is the only real tyranny, because it cannot be fought against. Tiberius, Ghengis Khan, and Napoleon were assuredly redoubtable tyrants, but from the depth of their graves, Moses, Buddha, Jesus, and Mahomet have exerted on the human soul a far profounder despotism” (p. #).

From the discussion above, we can conclude that, on the level of intelligence, the crowd is always lower than the individual. However, the actions driven by the crowd’s feelings can result in consequences better or worse than that of individuals. It all depends on the specific environment and the implications that the crowd receives.

Even though Le Bon speaks very harshly on crowds, I believe that the crowd is a natural state of a human being and is crucial. Without those illusions of the crowd, humans would never be able to break away from their primitive savage states. Those illusions are useless fantasies, but undoubtedly, they have enabled humanity to create splendid arts and great civilizations that should be memorized forever. Just like what Le Bon says, “It is not by reason, but most often despite it, that are created those sentiments that are the mainsprings of all civilization--sentiments such as honor, self-sacrifice, religious faith, patriotism, and the love of glory.” 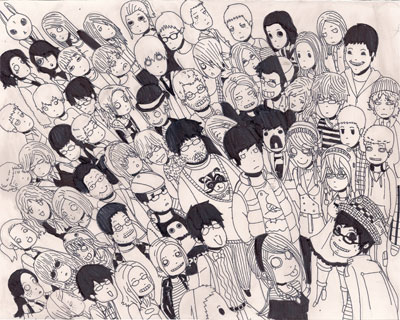