Orientalism by Edward Said and Season of Migration to the North by Tayeb Salih: Postcolonialism's Mirror of Colonialism | Teen Ink

Orientalism by Edward Said and Season of Migration to the North by Tayeb Salih: Postcolonialism's Mirror of Colonialism

In Orientalism by Edward Said, the author examines several aspects of Orientalism and its impact on the eastern world. Said explains how Orientalism is the way in which the West imparts authority over the east through cultural dominance and the reconstruction of political power.  In Tayeb Salih’s Season of Migration to the North, the Narrator, who is able to leave his village in Sudan and study in Europe, witnesses how European culture holds dominance over Sudanese life.

When Europe colonized many African countries, they rebuilt governments by creating a class of native-born elites in the colonized country, known as the proxy ruling class. One day, when the narrator returns to his village, he tells his friend, Mahjoub, about the conference he attended in the capital to discuss education policies with various ministries of education. He tells Majoub about the duplicity of these rulers by describing their behavior. He says, “you will not believe the facts about the new rulers of Africa, smooth of face, lupine of mouth, their hands gleaming with rings of precious stones, exuding perfume from their cheeks, in white, blue, black, and green suits of fine mohair and expensive silk rippling on their shoulders like the fur of Siamese car, and with shoes that reflect the light from chandeliers and squeak as they tread on marble” (Page 98).  By describing the proxy’s grandeur of their dress highlights how although his village may not face colonization, they are still under a corrupt government that was put in place by the colonizers. The proxy class essentially dresses and thinks in a European way, which explains why the proxy class was the European’s way of indirectly controlling the African countries. The superiority of the West, which the proxy class mimics, is represented through their ways of displaying their superiority, as they have a colonial ideology. The narrator’s description of the proxy’s “hands gleaming with rings of precious stones,” displays that the proxy class takes the place of the Occident, as they highlight their own superiority through the opulence of their dress. African countries that gained independence from the Occident, were still in some ways the Orient, as they remained under the rule of a superior class. The West was able to indirectly colonize the Orient by reconstructing the government through the development of a rich upper class, which goes hand and hand with Edward Said’s third definition of Orientalism.

Edward Said’s third definition of Orientalism states that “Orientalism [is] a Western style for dominating, restructuring, and having authority over the Orient.”  Without taking the role of the colonizer, the West was still able to hold authority over the Orient as they reconstructed a government with a newly formed upper-class in charge, who mimicked Europeans. Although having gained independence from European colonization, the narrator’s town is still under the influence of Western society, suggesting that the West indirectly has authority over the Occident. The proxy class’ colonialist ideology maintained the social hierarchy introduced by the Europeans within the African countries, as they were able to provide better lives for themselves. Through reconstruction of African government and culture, the West is able to define themselves as superior without being the colonizer. 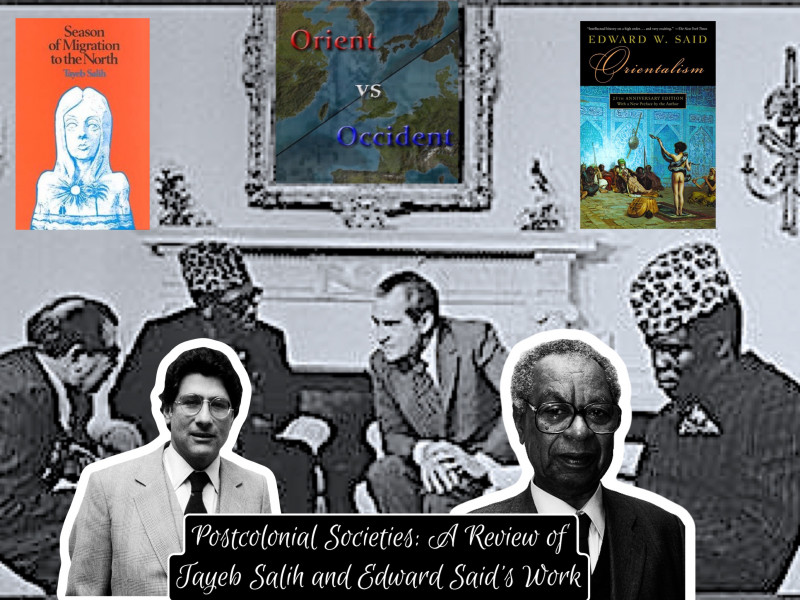 I wrote this piece after I read both novels, and realized that their messages clearly correlated. This article highlights how the social construction of colonialism is still a threat in a postcolonial world.

Favorite Quote:
"Without an open-minded mind, you can never be a great success" - Martha Stewart