The American Dream: The Notion of Rags to Riches in The Great Gatsby by F. Scott Fitzgerald | Teen Ink

The American Dream: The Notion of Rags to Riches in The Great Gatsby by F. Scott Fitzgerald

The American Dream is the idea in which achieving your highest dreams is attainable by putting in hard work despite your background, and where you come from. Throughout decades, many people work hard to attain this American dream, while some get to live the dream without putting in hard work. The idea of the American Dream provides a rosy view of life in America while ignoring the internalized racism, sexism, and much more that divides one human from another. During the Roaring Twenties, when The Great Gatsby was written, there was a strong economy and everyone across all social classes wanted to be a part of the economic boom. Gatsby obtained his wealth by bootlegging alcohol during the prohibition, unlike many working-class people that dedicated their days laboring in factories without much to show for it.  In The Great Gatsby, Gatsby’s rag to riches life transformation denies the work hard, play hard template. Fitzgerald uses Gatsby as an example to show a pessimistic view of the American Dream, denouncing the idea that anyone can succeed by working hard.

Fitzgerald uses the valley of ashes to signify his cynical views on the American dream. Fitzgerald describes the idea of going from poor to wealthy by trusting the American dream as romanticized and not pragmatic. The Valley of Ashes, the space between New York and Long Island, signifies the idea of American believers’ highest dreams going to ashes. Gatsby attains the American dream without putting in the hard work, as Fitzgerald explains that it is a realistic and practical way to go from rags to riches as the “dream” cannot just be attained by being a believer. Fitzgerald explains that during the time period, you had to be cutthroat and relentless. He highlights that without being ruthless, your American dream will go to ashes. Fitzgerald uses the valley of ashes to represent the lost dreams of American’s who try to achieve their goals the standard way which makes them unattainable. He signifies the idea that everyone has goals and hopes, but for them to actually come true and not get lost in the valley of ashes, you must be cutthroat and eager for success.  Fitzgerald describes the valley of ashes as “a fantastic farm where ashes grow like wheat into ridges and hills and grotesque gardens; where ashes take the forms of houses and chimneys and rising smoke and, finally, with a transcendent effort, of men who move dimly and already crumbling through the powdery air.” His characterization of the land is one filled with hopelessness and lack of ambition as the men there are “crumbling through the powdery air.” Their dreams are non-existent, crumbling into the air with thousands of other lost dreams. The men tirelessly and unenthusiastically work with the distant hope of achieving the American Dream, but with no dream fulfilling outcomes. He believes that anyone who just has a dream doesn’t just succeed by being passive, as dream achievers have to be cutthroat and aggressive. Fitzgerald suggests that the disillusioned ideas in attaining the American dream are not pragmatic, and without being merciless, your dreams will crumble into the powdery air of the valley of ashes.

Fitzgerald believes that the American dream can never be fulfilled because we always want more. For Gatsby, He achieved his goals financially, but never fully achieved his dream, as he wanted more. Even though he had money, he still wants love with Daisy, and to fit into the social norms of society. Nick says “He wanted nothing less of Daisy than that she should go to Tom and say: ‘I never loved you.’” All Gatsby wanted was to attain Daisy’s love, but she was married to Tom which made his pursuits futile. Because he couldn’t have a relationship with daisy, he couldn’t fully attain his American dream. Even though he had become extraordinarily wealthy, money wasn’t the end of his American dream. Thus, the American dream is viewed as pessimistic by Fitzgerald as it can never be fully fulfilled. He explains that even if you are cutthroat and achieve your goals to be economically successful, there’s always something missing. For Gatsby, he had all the money he needed but could not attain the love that made his American dream true. Gatsby’s dreams may not have gone into the valley of ashes, but he still didn’t fulfill his American dream, as he strived for love but couldn’t get the lustful relationship he endeavored.  Working hard is simply not enough to achieve the American dream, as no matter how hard or how little you work, you always come back wanting more.

The American dream is not attainable from Fitzgerald’s point of view. He paints a somber picture of believers who ultimately never achieve their goals through hard work. Gatsby was successful by not attempting to follow the traditional and honest way of success. Instead, he conned his way to a wealthy lifestyle, as he realized by being just a believer would not help him achieve his dreams. Even though Gatsby economically achieved his goals, his American dream was not complete, as he desired more. This highlights that you can have all the money in the world, but still live an unhappy and lonely life. Gatsby was richer than the typical person, but without love in his life, he didn’t fit into the societal norms which blocked him from fully attaining his American dream.  Without Daisy in his life, the American dream felt incomplete. Fitzgerald is pessimistic about the typical American dream because, through the example of Gatsby, it is not easily achieved. Each character in Gatsby may put on the front that they have everything they need, but each one wants something more that’s unattainable. Fitzgerald provides a pessimistic view of being a dreamer in America because the American Dream is simply unattainable, and society should not consistently try to chase what they can’t have. 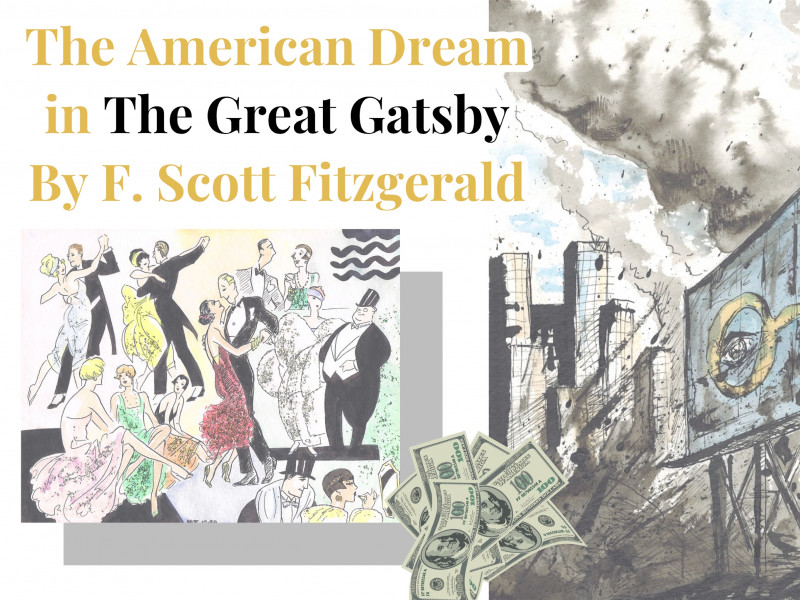