Slaughterhouse-Five by KurtVonnegut is a gripping tale filled with action and suspense. Thenarrative is told by Billy Pilgrim, a German-American veteran of WorldWar II who survived being a prisoner of war.

This is not thetedious war synopsis I thought it would be. Although Vonnegut'sprotagonist does take part in a war, he also goes through a series ofanachronisms, becoming “unstuck in time,” which makes thebook much more exciting. It grabbed my attention from cover to cover andshowed me the experiences of war and of prisoners of war.

BillyPilgrim is a very unusual character who describes himself as“funny-looking” and clumsy. As he travels through time, hecan view all of his life. He also sees parts of the war, suffers theinhumane treatment of being a POW, and is abducted by extraterrestrialsto the planet Tralfamadore. The setting changes on almost every page,which made me want to continue reading to discover what would happennext.

Because there are at least three stories happening at thesame time, the climaxes are scattered throughout, making each chapterexciting.

In addition to the many settings, Vonnegut also useshumor which had me constantly laughing. The witty dialogue added to theoverall pleasure of the book. In addition, it is also rather short, soit is effortless to read for those with short attention spans. Theanti-war theme is another reason the book appealed to me.Slaughterhouse-Five is a classic and a masterpiece that I will add to mylist of favorite books.

Slaughterhouse-Five is an incrediblenovel that I strongly recommend. It is filled with extraordinarycharacters, unexpected settings and hilarious situations that allcontribute to the many reasons I urge you to read it. Does Billy everreturn from his alien abduction? How does he die? The answers andresolution of the book are surprising and made me want a sequel. 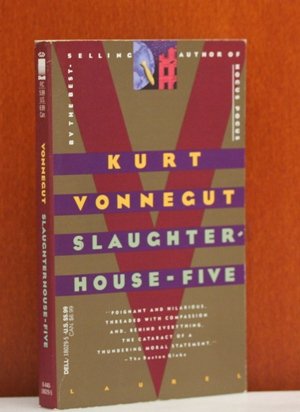 Billy Pilgrim is the main character. But he is NOT the narrator. The Narrator is Kurt Vonnegut. He is a character in this book as well. He follows the same way as Billy Pilgrim, so he can recount everything that Billy can.