Wicked: The Life & Times of the Wicked Witch of the West | Teen Ink

Wicked: The Life & Times of the Wicked Witch of the West MAG

When a friend played the song“Popular” for me, I fell in love with it. She told me it wasfrom a new Broadway musical called “Wicked” that told thestory of the Wicked Witch of the West. From that moment, I wasdetermined to see the show, and when I learned that it was based on abook, I ran out, bought the book and read it in a day.

A prequelto L. Frank Baum's The Wonderful Wizard of Oz, this book followsthe Witch in a sweeping tale that uncovers secrets about Oz,Munchkinland, the Wizard, those magical ruby shoes, Dorothy, Toto, evenGlinda the Good Witch. It's thrilling and entertaining withOz's takes on politics, society, religion and acceptance.It's raw, honest and slightly foreshadowing toward our ownrace.

The Witch, named Elphaba (after Baum's initials,L-F-B), is a tall, slender girl from Nest Hardings. She grew up rightalong the infamous Yellow Brick Road, energetic, cultured and relatively“normal,” save one thing - her skin is froggy green. As thestory progresses, Elphaba grows up and goes to Shiz University, whereshe experiences discrimination.

You meet other characters, too.There's Glinda, of course, but there's also Fiyero, a youngprince; Madame Morrible, the horrible headmistress; Boq, a munchkin; andNessarose, Elphaba's younger, disabled sister, to name a few. Youalso meet several Animals - that is, human-like animals with speechcapabilities who hold jobs and social positions but face the samediscrimination as Elphaba. Soon Elphaba's desire for justice - forherself and the Animals - leads her to new people and the unveiling ofold secrets.

Wicked is a coming-of-age story that anyone familiarwith pop culture can identify with. The characters are familiar andincredibly complex; the storyline is thrilling, twisting andunpredictable, and the renderings of Oz are wonderful. The sarcasticmood and compelling chain of events will give new perspective onequality, acceptance, love and loss to any reader. 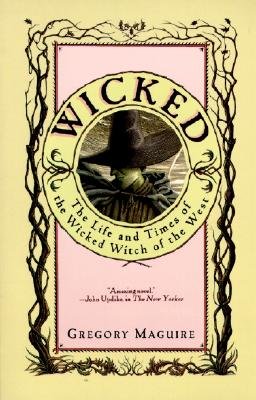