I was not even an infant during Duke's back-to-back men's basketball championships, but Mike Krzyzewski's book made me feel like I was watching every one of those games.

In 1990, against the unbeatable UNLV Running Rebels, Duke stole the championship. The following year, they went to the championship again to defeat the fab five of Michigan.

Mike Krzyzewski coached at Duke for 25 years (plus five years with the Army). He has compiled a 621-181 record, which includes three national championships and 12 final-four appearances. Before becoming a coach, he was a captain in the Army.

I love this book because of the behind-the-scenes look at a great basketball team, and their struggles to win a national championship. Instead of getting the reporters' view, you get to see the season through the eyes of the players and Coach Krzyzewski.

Something else that makes this book great are its characters. Christian Laettner is the star of the team, and looks like a pretty boy. He is also the lone senior who carries the team with his experience. His harsh criticism of others may make you think he's a jerk, but he's really a nice guy who just uses criticism to get his teammates to perform at a higher level which was how he was taught.

Bobby Hurley is a small, almost emotionless point guard. He is quiet and doesn't talk a lot of trash, but leads by example. He is the most dedicated player and was always the last to leave a practice. He is the true leader of the team, but you wouldn't know it from talking to him.

Grant Hill is a dynamic freshman who lives in the shadow of his father, a football Hall of Famer. Grant eventually finds his own spot in the basketball world and becomes the most exciting player to watch on Duke's squad, stunning crowds with impossible dunks.

But the most interesting character is the Duke coach and narrator, Mike Krzyzewski. Seeing how he will respond to the outcome of the next game keeps you on your toes. The unique ways he teaches his players not just basketball but about growing up is pretty awesome. Read Five-Point Play. 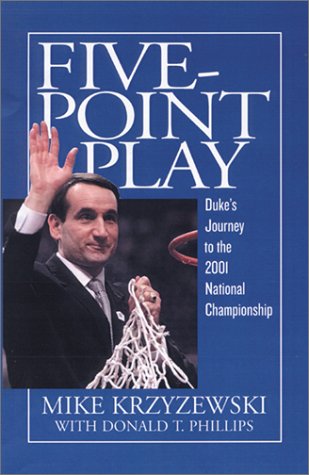