First They Killed My Father MAG

"An eloquent and powerful narrative ... This is an important story that will have a dramatic impact on today's readers and inform generations to come," said Dith Pran [whose story was told in "The Killing Fields"] of this gripping true story. Ung's incredible first-person narrative makes the reader feel as if they are living her life.

Loung was a five-year-old girl in a loving, middle-class family in Phnom Penh, the capital of Cambodia, when the communist Khmer Rouge took over her country. You feel Loung's fear and confusion as soldiers force her family and others from their city. You are there with her as her family struggles to stay alive and together as the Khmer Rouge takes over.

Forced to live in small villages, Loung must not speak of her past because her father worked in the old government and they could all be killed if the soldiers discover this. As those around them die of disease and starvation, her family clings to each other for support, but is slowly torn apart. The older boys are sent to a labor camp, the oldest girl is sent away and dies. Loung's father is taken away, never to return. Eventually, her mother sends three of the remaining four children away because she can no longer support them.

Loung and her sister Chou travel to a girls' work camp where they tell the leader they are orphans. Despite her young age, Loung is sent to another camp to become a soldier. While there, she occasionally is allowed to visit Chou or her mother. On one visit, Loung discovers her mother and younger sister have been killed.

First They Killed My Father is a powerful, moving story. I also learned about the Cambodian civil war and the effect war has on families.

Today, Luong is an advocate for the Campaign for a Landmine-Free World and travels the world speaking about landmines and her experiences in Cambodia. "As I tell people about genocide, I get the opportunity to redeem myself ... It's empowering; it feels right. The more I tell people, the less the nightmares haunt me. The more people listen to me, the less I hate," she says. 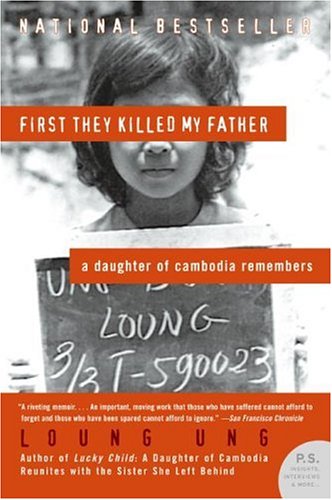 Favorite Quote:
"Nothing is impossible, the word itself says,"I'm possible!"-Audrey Hepburn

Favorite Quote:
"Above all, love each other deeply, because love covers up a multitude of sins."

View profile
I've been meaning to comment on this, but I've been so busy; which is a bad excuse and not a excuse at all, and for that I apologize. I love this. I absolutely, love this. It's just phenomenal and breath-taking. It has so much beauty and rawness and emotion and honesty; and so much more, that I absolutely, want to read it and have the book as my own. You're an amazing and wonderful and talented and beautiful wand strong writer and person. You have talent and greatness and light and a beauty that is your own; and so much more. All of this and just so much more. Thank you so much for sharing this, my friend! This touched my heart a lot, and I absolutely love your writing. Congrats on having this already published in Teen Ink's magazine because you truly deserve it. Thank you, again. :)