The Gatekeepers takes readers inside theadmissions office of Wesleyan University and sheds light on the process thatdetermines who will and will not be accepted into America's most prestigiouscolleges and universities.

New York Times reporter Jacques Steinbergfollows admissions officer Ralph Figueroa's tour of the country to promoteWesleyan and help select the next freshman class. Steinberg also shadows severalstudents Figueroa talks with and lets us know where they end up going. TheGatekeepers originally appeared in the Times as a series of front-page articles afew years ago.

Recently, many colleges have been flooded withapplications. For the Class of 2004, Wesleyan received over 7,000 applicationsfor 750 spaces. Not only have they experienced a boom in applications, they havealso seen more racial diversity. In the mid-1960s Wesleyan, under the directionof a new dean of admissions, began to recruit minority students. Before 1965,Wesleyan only admitted a few black students each year. But in 1969, Wesleyanincreased this to 27 minority students, 14 of whom chose to attend. From therethe number has rapidly grown.

The Gatekeepers also offers advice. Onemajor tip: there are no rules when writing college essays. When one student askedFigueroa whether or not to use poems for the essay, he responded, "Don'tsend me poems." Then he read several spectacular poems and told the studentshe liked them.

Another tip? Never apply to just one college. The chancesof getting into a top choice are remote, especially if it is a prominent school.Always apply to your top pick, but also to other colleges so that you are notleft scrambling at the last minute.

One key factor that can impactadmission is the college essay. Tiffany Wang, a student whose essay Figueroareads, wrote about her struggle with her parents' culture and feng shui. Figueroadecided not to admit her. Tiffany could have written about her connection withprisoners on death row. It turns out Figueroa is against the death penalty andsays he probably would have admitted Tiffany if she&#39d written her essay about herprisoner friend instead.

Overall, The Gatekeepers is a good book and amust-read for college applicants. 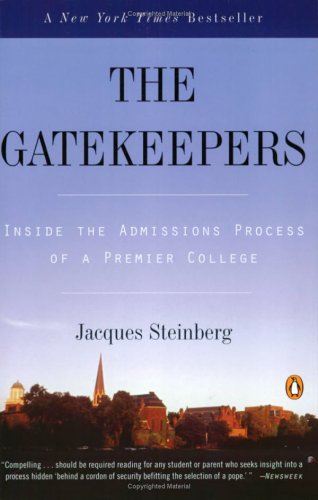