Finding Shanghai Baby was perhaps one of the most fortunate happenings I've experienced. Walking through the bookstore, its bright cover caught my eye. When I read its blurb, though, my heart sank. My parents are liberal (something I am constantly thankful for), but surely even they would balk at the affairs, seduction and impotent drug-addicted artists in this book ... but it sounded intriguing. Wistfully, I placed the book back on the shelf.

We were there so that I could pick out books for my birthday, so later, Shanghai Baby still on my mind, I led my mother to it, placed the book in her hands, and buried my nose in another book while she read the back.

"Cool," she said. "Is that all you want?" Her voice ringing in my ears, I nodded happily. This would be a special book; it couldn't disappoint.

My enthusiastic assessment was correct. Shanghai Baby tells of a year in the life of aspiring writer Nikki, nicknamed Coco for Coco Chanel, and her tempestuous relationships with her artist boyfriend, his friend Madonna, her novel, and her married German lover, Mark.

The writing is incredible; Wei Hui's similes and metaphors are like none other. For example, when talking about remnants of dreams after waking, she writes, "... my mother would wake me up in the morning ... and my head would be filled with the bubblelike remains of my dreams."

At one point, she goes to a Shanghai dance club, where she meets Mark. Describing the dancing crowd, she says, "The more you danced, the happier and more unfettered you felt, until you were vaporized out of existence and your right and left earlobes were both quaking - then you knew you&#39d reached the peak." The amazing imagery of Shanghai helped both the book and its characters come alive. The story itself is also very compelling.

The author, Wei Hui, was educated at the eminent Fudan University in Shanghai, and has published several short story collections. To my dismay, they are not available in the United States. Shanghai Baby has been banned in China. 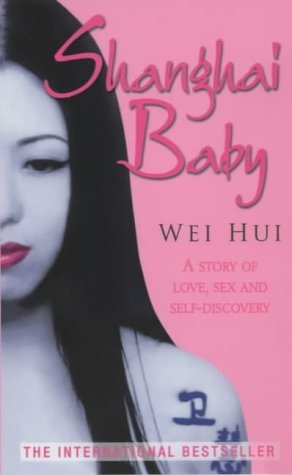