Twoyears ago many of us would have thought of Afghanistan as just another country insouthern Asia, if we thought about it at all. Some may have known that theTaliban ruled that country, but not many would have any idea about how itruled.

In 1996, the Taliban militia took control of Kabul, the capitalcity. At that point girls could no longer attend school, women were no longerallowed to hold jobs, and books were burned. Everything in Kabul changedcompletely. Under the Taliban, women had to wear a burqa, which covered them fromthe top of their heads to their feet.

After September 11, people learnedmore about Afghanistan, a country slightly smaller than the state of Texas. Evenwith more attention focused on the region, though, the life of women under thestrict Taliban regime was still not fully understood.

The Breadwinner is about life in Kabul under the Taliban. The story centers around a young girl, Parvana, whose family iswell educated because of Western books in their home; her father even readletters for people in the market place. When he is arrested for having studiedoverseas, Parvana takes over the responsibility of feeding the family. She cutsher hair short, dresses like a boy and works in the marketplace. There is theconstant fear that someone will discover she is not a boy. While working, shemeets a friend from school, Shauzia, who also works there. Together they sellcigarettes. Shauzia suggests that a great way to earn a lot of money is to dig upskeletons and sell their bones. Despite the disrespect and regret they feel doingthis, they know they will make more money selling the bones.

I likedThe Breadwinner because the novel is based on true-life stories and is wellwritten and well worth reading. I recommend it to anyone who would like to learnabout life in Afghanistan under the Taliban. I learned how controlling theTaliban is. The only aspect I disliked is that it ends unexpectedly; I would haveliked more.

This book, an easy read, helped me understand what life islike in a different culture and gives an idea of how people live in parts of ourworld.

Royalties from the sale of the book go to a relief organizationbenefitting Afghan women. 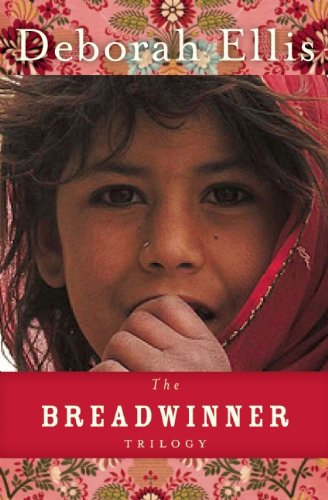 Favorite Quote:
A writer is a world trapped inside a person

Favorite Quote:
"Political language... is designed to make lies sound truthful and murder respectable and to give an appearance of of solidity to pure wind." George Owell

View profile
Sounds like a great book.... I'm going to read it !