I Have Lived a Thousand Years | Teen Ink

I Have Lived a Thousand Years MAG

LiviaBitton-Jackson's I Have Lived a Thousand Years: Growing Up in the Holocaustdepicts the struggles and horrors a 13-year-old Hungarian Jewish girl, ElvinaFriedmann (the author's birthname), goes through during the Holocaust. She learnslessons about love, determination and hope that usually take a lifetime tounderstand.

When branded with the yellow star, she faces embarrassment andshame. Her brother, Bubi, doesn't view the star as humiliation but as mock prideagainst Hitler. When Elli, her family and other Jewish people from her hometown,Somorja, are taken to the ghetto, the Hungarian military police take their booksand other possessions and burn them. All the men in the Ghetto are taken to laborcamps, Elli's dad among them.

After the men leave, the rest of the Jewsare moved to a concentration camp miles away and separated into groups based ontheir ability to work. Those unable to work are sent to the gas chamber.

I decided to read the book because it is a true story. The accounts ofthe abuse, little food and foul water really happened to this young, normal girl.The Holocaust was not a legend, as some may think, but an actual event thataffected the history of mankind. Today there are still people who have thetattooed ID number on their left arm, proof of Hitler's cruelty. His desire for aperfect race killed and wounded many innocents who did not meet hisstandards.

One weakness of this book is its slow start. After the firstchapter, though, it reaches a high intensity of cruelty to the human race.Thoughts of why someone would and could be so cruel flew through my mind as Iread it.

I recommend I Have Lived a Thousand Years to anyone willing togive some time to an extraordinary book. It is very moving and some parts broughttears to my eyes. 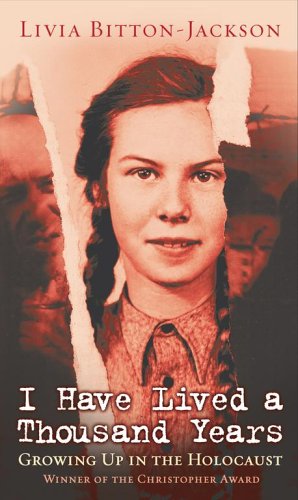