Let The Circle Be Unbroken MAG

Let The Circle Be Unbroken is very interesting. If youlike books that keep you entertained, I recommend you read this one. Once youstart, you won't want to put it down.

In Mississippi in the 1930s, blackpeople were still enslaved by racism. White people and black people didn't trusteach other, and no black kid was supposed to have anything to do with a whitekid!

The Logan family (the main characters) are hard-working, honestpeople who actually own the land they farm. Most black farmers are sharecroppersand at the mercy of the white landowner.

T.J., a friend of the Logans,gets into trouble when T.J. and two other fellows he thought were his friendsbreak into a store and kill someone. At the trial, T.J. is found guilty and getsthe death penalty. The Logan family believes he is found guilty because T.J. isblack and the judge and jury are white. The two other teens who broke into thestore are white, and are found innocent. T.J. tells the jury that they went tothe store to steal a gun. When the storeowner showed up, though, the two whiteteens killed the storeowner. At one point, Papa burns his own field of cotton tointerrupt the near lynching of T.J.

I hope you read this book. All people,no matter what race, form the circle of humanity, a circle that is broken byracism. I say, as Mildred Taylor does, Let The Circle Be Unbroken. 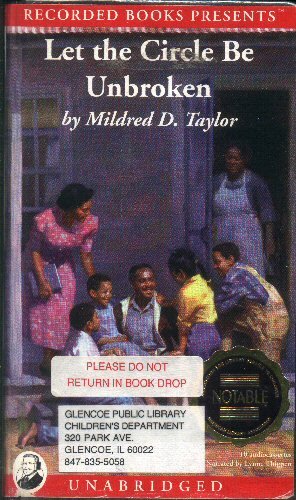