A People's History of the United States | Teen Ink

A People's History of the United States MAG

Aftermaking my way through all 634 pages of Howard Zinn's masterpiece, I experiencednot a sense of relief at finishing, but instead disappointment that I would nolonger have this book to look forward to reading. In my 17 years, this is thebest book I have ever read. I never found my mind drifting as I read, and I'mmuch more enlightened about my country's history than when I began.

Zinn,whose credentials include over 15 books and several decades of work as a collegeprofessor, gives a unique, factual view of American history through the eyes ofminorities, exploited workers, foreigners affected by U.S. policy, and othervictims of oppression. He admits that his perspective is not always unbiased, buthe wants to provide a counterbalance to the extensive collection of U.S. historytextbooks written from the upper-class, Caucasian male point of view by examiningthe forgotten millions who suffered while our nation prospered.

Stunningsections on Vietnam, the Spanish-American War and the suppressed labor movementsof 1877, 1886 and 1912, among others, give a fresh perspective to the motivesunder which our government operates. Zinn makes many keen observations thatilluminate the pattern followed by the powerful capitalist elite that hastraditionally existed in this country.

Without question, A People'sHistory of the United States should be required reading for any course that usesstandard history textbooks. Zinn generously extends an offer of free use of hisbooks to teachers, as well as providing a full-length teaching edition.

Any American with a genuine interest in his or her country and its peopleshould read this book. Eighteen dollars is a small price for such a potent lookat American history. 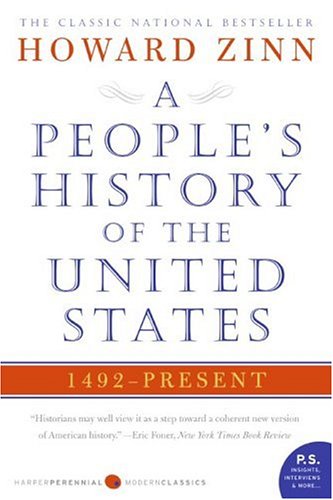