TheUnited States government has been plagued throughout its history withcorrupt leaders, cowards, and politicians who would do anything forre-election. Some, however, did what they believed was right for thenation they proudly represented.

John F. Kennedy's PulitzerPrize-winning Profiles in Courage tells the stories of some of thecourageous, self-sacrificing people who have made our nation the greatplace it is today.

Each man depicted confronts a serious issuewhere his conscience dominates his opinion, usually in spite of theviews of his own party or of his constituency. Often, the decision madefor the good of the country led to his political death.

First,the reader hears of the unconventional, pessimistic John Quincy Adamsand his many struggles on countless issues. Adams spent much of hispolitical life with little support, yet still made a name for himself byvoting his conscience rather than with popular opinion.

Later,three major players in the events leading to the Civil War - DanielWebster, Thomas Hart Benton and Sam Houston - are profiled. Each man,with a very different view on the slavery issue, defied party platformsby abandoning their stand on slavery to reach a compromise so that theUnion could be preserved. Each was ostracized by his party andconstituency after his plea for peace, and although their efforts failedin the long run, they were among the most courageous leaders of theirtime in their endeavors to maintain peace and the Union.

Otherbrave leaders profiled include Edmund G. Ross for his prevention ofPresident Andrew Jackson's impeachment and the ensuing overthrow of thepresidency by the Senate; Lucius Quintus Cincinnatus Lamar, for hisopposition of the "free silver" movement and resultingprevention of massive, insufferable inflation, as well as others whorefused to bow to pressure while doing what they thought wasright.

Although he certainly disagreed with the opinions ofsome of the subjects of his writing (such as Robert A. Taft's defense ofthe Nazis convicted in the Nuremberg trials), Kennedy makes a strongcase for the courage and bravery of each man; he shows their dedicationto conscience, widespread (but unwarranted) dislike of each position,and the consequences incurred by every man because of his actions.Kennedy also substantiates each politician's opinion by demonstratingthe positive result it brought about, or intended to bringabout.

Profiles in Courage is a fascinating read, especially whenone realizes the overwhelming consequences each man knew his actionswould trigger. Anyone who reads this book will certainly feel empathyfor these men. We can only hope to demonstrate such bravery in our ownlives. 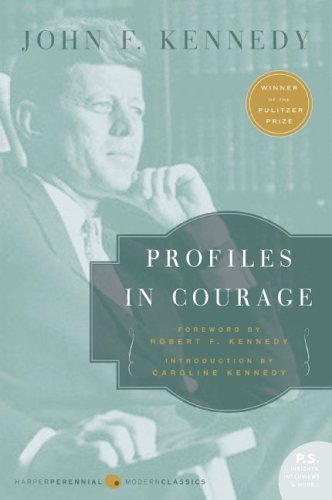