A missionary, his wife and four daughters arrive in the Belgian Congo on the eve ofits bloody independence with only what they can carry. In the Congo, the Pricefamily faces the realization that everything from seeds to scripture isfrustratingly mutated. From bringing the local tribes to faith, playing in thered dirt, attempting to bake bread out of dust to opening stashed boxes of BettyCrocker cake mix, the Price family grasps at recognizable life.

With theoverthrow of the tyrannical Belgian imperialists and the murder of the firstelected president, however, the violence forces the Prices to face brutalrealities. Set against one of the most horrific political times of the 20thCentury, Barbara Kingsolver weaves an intricate tale of desperation, survival anddiscovery.

The strength of this book lies in the evolution of charactersand their relationships. Our perception of the situation is seen through the eyesof the daughters and wife, and the different narrators add depth by allowing usto see each character from several angles.

Another crucial aspect of thecharacter development is their contrasting natures. The greatest of all is themissionary, or "The Father," as he is referred to by his daughters. Heis a brutally inflexible person, unrelenting in his hypocrisy and obstinatefaith. A dark shadow of power, he believes, "No God, in my heart on earth,was ever more on the lookout for human failing." He punishes his daughterswith endless copying of Bible passages that pertain to their committed"crime."

In contrast, Orleanna Price is a woman of vivid beautywithering under the pressure of her domestic duties. Her character is morecontrolled, seen best in how her love for her daughters is overwhelmed by herrelationship with her husband.

Kingsolver's novel grabs at the heart. Thefirst several chapters are somewhat burdensome as the world of the PoisonwoodBible is established, but the reward is worth the effort. Kingsolver's depictionof disappointment, the effects of guilt, and the power of religion are hauntingand unforgettable.

We are intertwined with her characters, and she usesthem to explore religion, its exploitative power and natural beauty. Moststimulating is her subtle development of the comparison between the organized anddemanding religion of Nathan and the more natural religion that can and will growwithout boundaries with sensitivity and love.

Her metaphors, partneredwith her choice of words, are effective and enticing. No sentence isostentatious, but filled with simple depth.

She engages the language ofthe Congolese, investigating the divergent meanings of words based on a slimmargin of pronunciation and emphasis. Her most interesting play on words stemsfrom Nathan's arrogance and impatience that keeps him from ever properly learningthe language. "Tata Jesus is Bangala," Nathan yells from his pulpit.Though his intention is to tell the African people "Jesus is precious,"his mispronunciation means "Jesus is poisonwood."

Poisonwood isa tree that causes immense discomfort and itchiness. His mistake is a poignantone, depicting his very core. It is his mispronunciation that causes tragedy andforces his daughters to "bear the emptiness of a life without his God"once he is gone.

Barbara Kingsolver offers a piece of the heart so realthat we can't help but cry at the characters' sorrows, laugh at their joy andbeat our fists in anguish at their suffering. Her novel does not strikeimmediately, but comes to rest heavily, so that we cannot forget the hauntingreality of her creation. Béene, Béene (true as the truth can be) -in the language of the Congolese - is the finest description of BarbaraKingsolver's The Poisonwood Bible. 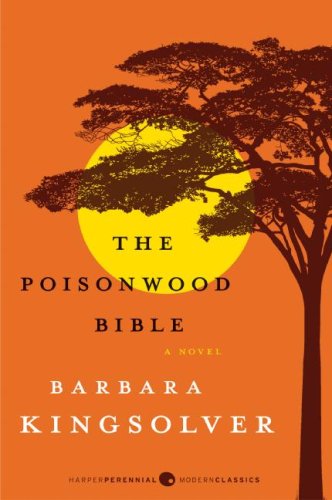