Thanks to My Mother | Teen Ink

Thanks to My Mother MAG

Thanks to MyMother by Schoschana Rabinovici is one of the most moving memoirs I have everread about the Holocaust.

Born Susie Weksler, Rabinovici was only eightwhen Hitler's forces invaded her Lithuanian city of Vilnius, a great center forJewish learning and culture. Soon after, her family faced hunger and fear in theJewish ghetto, but the worse was yet to come.

When the ghetto isliquidated, some Jews are selected for forced labor camps and the rest arekilled. Susie would live because of her mother's courage and ingenuity. Shecarries Susie, hidden in a back pack, to the group destined for the labor camps.Susie is disguised as an adult to fool the guards into believing she is 17. Hermother cares for her body and soul through gruesome conditions in threeconcentration camps and a winter death march.

This is a haunting book. Itis amazing what the human spirit can endure when there is only a bit of hope.Susie's mother is determined that not only will they both survive, but that shewill retain her humanity in the process, often sharing rations and thinking ofways to help other prisoners. Rabinovici is unsparing in her recollections: shedescribes "selections" when babies abandoned by their mothers aretrampled, a bathhouse abortion, and a hellish journey on the cargo deck of a shipwhere the passengers are sprayed with feces and vomit.

The onlyconcession made to younger readers is footnotes that define religious, politicaland historic terms. Its biggest fault is that the author lacks the redemptivevision of, for example, Livia Bitton-Jackson in I Have Lived a Thousand Years.

Readers whose interests include Holocaust testimonies and do not dependon literary polish, and are mentally prepared for the harshness of Rabinovici'sexperiences, will come away with renewed appreciation of the extraordinaryfortitude required to survive those dire times. 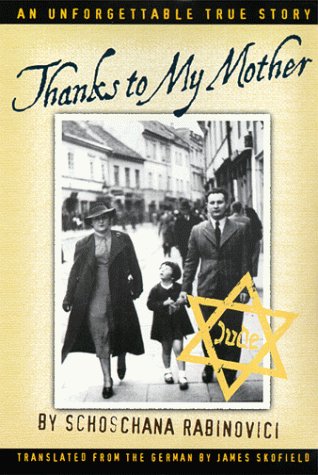