This is the Hour _ a Novel About Goya | Teen Ink

This is the Hour _ a Novel About Goya MAG

Anovel filled with aching realities of life, tragedy and passion takes you to thetime of one of the most famous artists in history - Francisco de Goya.

Facing his own grotesque existence in the ultimate climax of hisartworks, the leading artist of France is driven mad by the world around him.His-torically accurate, the novel gives an integral view of the period and itsconflicts between the classes of society. It exposes the raw human emotions andshows how they're reflected in this man's creations.

This is the Hour has influenced megreatly because it shows Goya as a multi-dimensional character whom I got to livealongside and breathe in the smell of his paints. From the novel and its amazingillustrations, I could see his view of the world change. I realized how differentlife can look to a person who stops believing in the future and starts seeing hisown nightmares take the forms of living demons.

This novel will fascinateanyone with an interest in art and the world's impact on its inspiration. It's along novel that is thought-provoking. If you like serious analysis of art,character, thoughts and history, I strongly recommend This is the Hour. 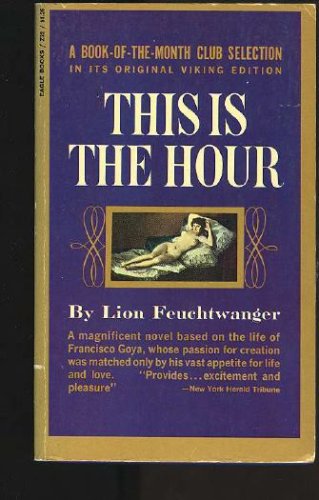