"Inthe months to come, because one did have to keep on walking, one desperatelywanted to believe nothing had changed during those years of suspended animation.But of course, as was soon discovered, everything had."

As a youngJapanese-American girl living in California at the outbreak of World War II,Jeanne Wakatsuki's family was sent to an internment camp with other Japanesefamilies. Because of America's fear of the Japanese - even those who wereAmerican citizens - Jeanne's family was forced to live in a cold, dirty andcomplicated place - Manzanar.

Jeanne Wakatsuki lived through a tragedy ofmisunderstanding, fear and confusion. Life during WWII was stressful andunforgettable. At the camp, she lived in a six-by-ten room with 19 others.

I like that at times Wakatsuki uses Japanese words. It has been comparedto Anne Frank's The Diary of a Young Girl. Frank and Wakatsuki both witnessed thetragedy of war and wrote books that are daring and amazing.

On a scale ofone to ten, I give Farewell to Manzanar a ten. I enjoy reading about WWII, andManzanar kept me interested. 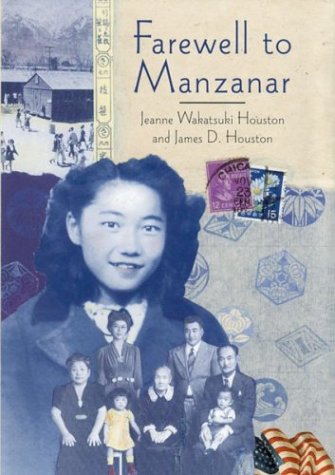