On July 21, 1999, 14-year-old Gina Score was made to rununtil she died in a South Dakota boot camp. On her second day at the camp, Scorewas forced to run three miles - despite her weight of 226 pounds. It was humid,and when other inmates gathered around to provide shade for the barely consciousteen, they were shooed away by the staff. Gina died en route to the hospitalafter lying three hours without medical attention.

Once this story broke,news of more abuse surfaced. Teens told of being restrained for hours, raped bystaff and forced to eat their own vomit. Score's parents filed a lawsuit againstthe state, a vocal organization was founded by parents who wanted to protecttheir children from abuse by juvenile corrections officers, and a Washington,D.C. advocacy group visited and forced South Dakota into a settlement.

South Dakota is really not unique; similar events are taking place inboot camps all over the country. An American GULAG: Secret P.O.W. Camps for Teensbroadened my perspective. Behavior modification camps are located in remote areasof the U.S. and in countries like Jamaica and Western Somoa. GULAG documents whatcan happen behind closed doors. Youth often bear terrible abuse, including beingforced to stand for hours without moving, enduring electric shock and beingattacked with pepper spray. Many die in these camps.

Parks tells the storyof her effort to rescue her niece, Katie, who was sent to a behavior modificationcamp when she was 14. Years after her release, Katie whispered, "Youwouldn't believe the things they did to me. But I know now it was for my owngood." She had become so brainwashed that she was still thanking herabusers.

Parks' powerful documentary is the best book available dealingwith these behavior modification camps. GULAG reaches out to parents and teensacross the country, crying passionately for change and common sense. The bookincludes appendices with stories by teens who have been held at thesecamps.

Parks' book only scrapes the surface of the abuse, but gives thereader a powerful glimpse into this terrible business. It shocks and puzzlesreaders, then draws them into the secret world of the gulag. Although at firstyou may think her book an exaggeration, Parks will convince you that this is areal problem that calls for immediate change.

A must-read for all teens,An American GULAG is a moving and suspenseful story that may include informationto protect yourself. I really can't thank Alexia Parks enough for having exposedthe stunning truth about behavior modification camps. 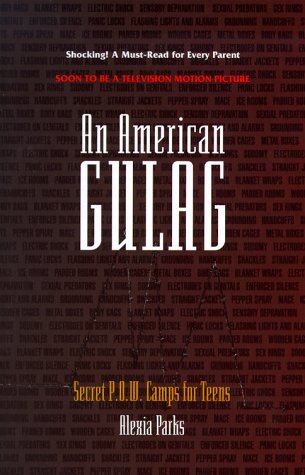