In Catching Fire, the second book of the Hunger Games trilogy, Suzanne Collins captivates the reader and takes him or her on a rollercoaster ride filled with danger and excitement. Like The Hunger Games, this novel presents life and death as a game sanctioned by the government. Without question, the author has created a masterpiece of thoughtful provocation. Catching Fire is a must read for anyone yearning for a suspense-filled plot, emotional themes, and a fiery teen-age heroine’s point of view.

Collins brilliantly pulls the reader into the plot by hinting of a possible rebellion and presenting a completely unexpected turn of events. As the most recent victors of the Hunger Games, Katniss and Peeta prepare for a sensational tour of the twelve districts of Panem. Due to the unusual ending of the games and the mounting tensions in the districts, Katniss fears retribution from the Capitol for her actions. Collins portrays Katniss’s reluctance to feed the rebellion when she writes, “An act of dissent from the people of District 11. This is exactly the kind of thing I am supposed to be defusing!” (62) Worrying about interference from the Capitol, Katniss wonders if she will be able to reach her goal of saving Peeta’s life. By urging the reader to make assumptions about the direction of the plot, the author skillfully fools him or her by injecting unimaginable twists.

Catching Fire grabs the emotions of the reader as it intertwines the themes of betrayal and love. With an understanding of the rules of the Hunger Games, the reader realizes that any alliance will eventually result in betrayal. In each passage, the actions of the characters hint at the treachery that is sure to follow. Collins clearly identifies the theme of betrayal and Katniss’s acceptance of it when she writes, “Johanna attacked me. . . . The alliance is over. Finnick and Johanna must have an agreement to turn on us tonight” (372). In addition to betrayal, the theme of love is evident throughout the novel. Making no secret of his feelings, Peeta constantly positions himself to provide support and protection to Katniss. Although she has deep feelings for him, Katniss is not in love with Peeta, a subtle difference that plays with the reader’s emotions and adds intrigue to the story.

Suzanne Collins skillfully tells the story through the point of view of Katniss, a rebellious, outspoken teenager. Taking the reader on a journey that will not be forgotten, Katniss provides personal, insightful information about the other characters. While analyzing the people and their actions, she presents possible motives to be accepted or rejected. By speculating on actions that she is not involved in directly, Katniss furnishes details important to the novel. As the action reaches a climax, Katniss provides a vital piece of information to the reader by recalling what Haymitch, her trainer, told her, “‘You just remember who the enemy is’” (378). By sharing Katniss’s thoughts, the reader experiences her apprehensions and convictions.

As a science fiction novel filled with suspense, Catching Fire is well worth reading. By creating its many twists and turns, Collins ensures that the reader is unable to put the book down. Having created a time machine in the form of a novel, Collins is providing an escape from reality. Once caught in the time machine, the reader will anxiously await the release of the final book of the trilogy. 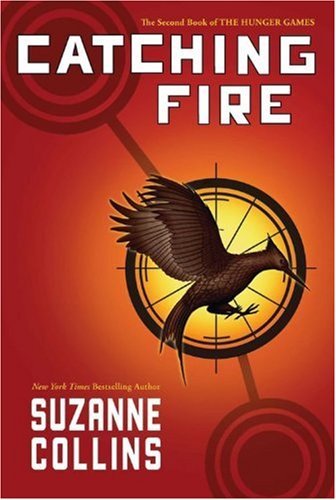