Chords of Strength by David Archuleta

When first asked to write a memoir, David rejected the idea, thinking he was too young and would have nothing to say. But after some thought, David decided to pursue it. He thought it would be a good way for his future kids and grand kids, and even his fans, to know his story straight from him. It would also be a way to get his own thoughts straight, his years of journal writing now paying off.

David’s book, Chords of Strength: A memoir of soul, song, and the power of perseverance is David’s whole life story, from times before he was born, up until now. But it’s not just your basic memoir. Chords of Strength is an uplifting and motivating book, written to inspire everyone to go out and achieve their goals in life. That was one of David’s goals with the book, and he definitely achieved it.

The first line of the book is: “I have no idea why I’m doing this, but I know I need to be doing it for some reason.” That was also David’s last entry in his journal before he went off to Idol. It applied then, and it still applies now. David makes it very clear in this book that the only reason he auditioned for Idol in the first place, was because of his strong faith in the Lord. Most books that discuss religion are to convert. Not this one. David innocently speaks from the heart about how He has always been with him all through his life, through the good and the bad, and how He still influences him today. It’s not pushy, it’s plain pureness.

Not only does David get into the big topic, but he discusses the lighter ones, such as how he was raised to become the person he is today. Though his faith was a big part of it, another big influence on who he is has been his family. David explains both of his parents’ and even grandparents’ backgrounds, and how their musical history influenced his love for music. Which leads into another big part of this book…

The music. Some might think the chapter “School of American Idol” is all about David’s journey on the reality show. Really, it captures life changing moments David experienced while watching the reality show in it’s past seasons, from the performance by Tamyra Gray that changed his life, to singing in front of Kelly Clarkson at just the age of 11.

The title Chords of Strength has two meanings. The first, the obvious, the strength that is in each chord of music, for David, and for everyone. The second, being sort of a pun, David’s past vocal paralysis. The chapter “Bumps In The Road is mostly about David’s time on another reality show, Star Search, when he was 12 years old. During that time, David had fell ill with bronchitis, the flu, and even appendicitis. Having to sing while being so sick, it eventually wore out of his vocal cords to the point where one became paralyzed. David says in the book “When you’re someone who loves to sing, “vocal paralysis” are not words you ever want to hear.” Throughout the chapter David confides about his feelings when he was diagnosed, and how his faith and spirituality helped him through the hard times, including a time where he felt like he would never sing again, and how a part of him was missing.

While this book explains in various detail David’s upbringing and the challenges he’s faced in his life, the most inspiring part is when David explains how he gets through the hard times, how to stay positive, true, and how to always keep the faith. The beginning of the book was all about how David achieved his dream, and at the end he tells you how to achieve yours, and this book is perfect if you’re willing to take what David says to heart and act on it. It could be as big as becoming a singer, or as easy as planting a tree, one of the comparisons David makes in the book. This book is a motivating and enjoyable read for anyone who wants to start making positive changes in their life, and succeed at their goals, while learning a thing or two about David Archuleta in the process. 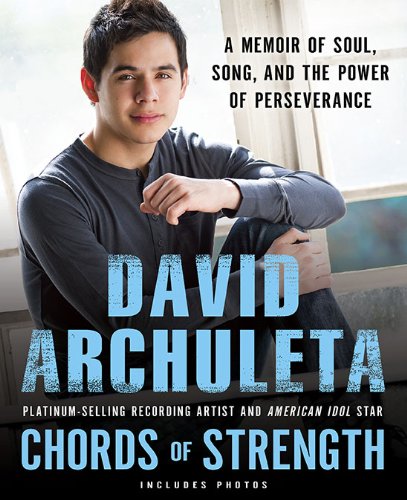 
Buy from Amazon
The author's comments:
I really enjoyed reading it. There's some amazing quotes, as well as some things about David I didn't know.
Post a comment
Submit your own